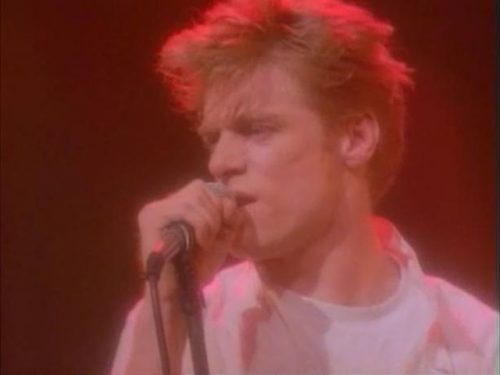 I can already sense the skeptics chirping. “If you had to put a Bryan Adams song in your countdown and especially in the Top 10, why the hell did you pick Heaven?”  I readily admit there’s a handful of Adams tunes more universally appreciated that better stood the test of time.  Summer of ’69, Everything I Do (I do it for you) and Cuts Like a Knife immediately come to mind.

Don’t get me wrong, I enjoy those songs as much as the next guy—or apparently not quite as much, because for me nothing Adams recorded was better than Heaven.

Starting in the 80s or maybe before that and I simply don’t care enough to research, the unwritten rule of rock music was an obligatory ballad or two had to land on every album.  Journey did it. Foreigner, Motley Crue, Styx and many others as well during this era.  You can’t argue its success—the formula worked, at least in regards to record sales.

Speaking of Journey, Adams was on tour with them in 1983 when he co-write Heaven with Jim Vallance.  The song, Adams admitted was inspired by Journey’s thriving ballad, Faithfully.

Still, even seeing the success Journey had by slowing down the tempo on occasion, Adams wasn’t convinced Heaven was good enough to be on his Reckless album.  Those sentiments were shared by famous music producer Jimmy Iovine, who reportedly felt the song was “too light” to be included on the album.

Fortunately, Adams changed his mind at the last minute and incorporated it on Reckless anyway.

The rest is commercial success history.

I’m not naïve when it comes to Heaven.  It isn’t a brilliant display of lyrical penmanship by any stretch.  I know it ranks high in the department of pop ballad cheese, and I’m perfectly fine with that.  Heaven is a sound ballad with sufficient spine to prevent it from going lifeless.

The decade had an overabundance of insipidly uninteresting power ballads that simply didn’t work.  Heaven wasn’t among them.

Of all of the Bryan Adams hits of the 80s, this was the most unpretentious and in my opinion, his best work—at least vocally.

I love this song because of Adams’ spotless vocal and also because I remember singing it to every chick I was infatuated with as a teenager—singing it to them in my imagination anyway.

I’ll go one further—Heaven is my second-favorite “love song’ of the 80s overall. (You’ll have to keep following to see the top ballad).

Chart Success:  Heaven reached number-one on the Billboard Hot 100, staying at the top for two weeks before getting knocked off by Phil Collins’ Sussudio.  It spent 37 weeks on the charts and finished 1985 ranked 24th on the year-end Billboard Hot 100.

Great Lyrics:  This song actually first appeared in a 1983 movie called A Night in Heaven. It was not released as a single.

Fun Facts: From Songfacts.com on the music video(s) accompanying this song: “Two version of the video were made. The first, released in November 1984, was directed by Steve Barron, who worked on most of Adams’ videos of the time. This one showed Adams standing on stage amid stacks of television sets showing parts of his band members. Shots of the crowd reveal that the seats are filled with not people, but TV sets, making Adams the only human in the building.

The second video was released in March 1985 and has a more accessible concept. In this one, a guy gets pulled over for drunk driving across the street from a Bryan Adams concert. The girl he was driving ditches him and goes to the show, where she and Adams make a connection. This second version was nominated for an MTV Video Music Award in the category Best Cinematography.”