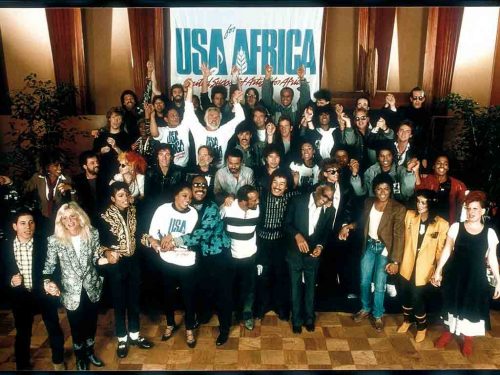 When looking back at my musical youth in the 1980s, few if any moments rival the spring of 1985 when We Are The World by USA For Africa was released. I’ll never forget the first handful of times I heard the song and saw the accompanying video, and how utterly awestruck I was by the distinguished ensemble cast of singers — plus Dan Akroyd.

Nearly anyone that mattered musically from that era was on that record—plus Dan Akroyd.  It’d be far quicker to list the American stars from the 80s that weren’t on the project (Prince and Madonna come to mind and Madonna wasn’t quite iconic yet) than the icons on it—plus Dan Akryod.

Michael Jackson. Bruce Springsteen. Lionel Richie. Stevie Wonder. Diana Ross. Paul Simon. Willie Nelson. Dione Warrick. Billy Joel. Tina Turner.  Bob Dylan. Ray f’n Charles. I can go on forever.  There was so much star power on We are the World that legends like Smokey Robinson and Bette Midler couldn’t even get their solo line!

Of course, the reason the superstars came together on the night of the 1985 American Music Awards (secretly at the time) was to make a song with the proceeds benefiting famine victims overseas in Africa. It would go on to raise more than $60 million.

It’s worth noting the slew of famous Americans coming together on this record wasn’t an original idea, as just a year prior a bunch of British stars did a Christmas charity record titled “Do They Know It’s Christmas.” That cast was led by Bono, Paul McCartney, Phil Collins, David Bowie and Sting among others—formidable giants in the music industry for sure, but nothing could hold a candle to the depth of the USA for Africa cast.

Here’s the other thing beyond just star power—the song itself was pretty good. I mean, it wasn’t getting air play at the club, a slow dance favorite at weddings or pumped on the boombox when hanging out with your crew, but this was a solid record, cheesy lyrics withstanding. I’m sure you were singing along—you probably just did so in the (complete) privacy of your home.

We Are The World has stood the test of time.

25 years later a mostly new crop of stars came together to remake the song for victims of the Haiti earthquakes. It raised a ton of money, admirable for sure—but in my not humble opinion the record itself sucked.

Great Lyrics: Are you going to be the one making fun of lyrics that benefited starving children in Africa? I think not.

“We are the world, we are the children

We are the ones who make a brighter day

We’re saving our own lives

Just you and me”

Fun Facts:  Prince was the biggest star at the time that chose not to take part on the record. His reasoning was simple—he never recorded with other acts. In fairness to Prince in lieu of being on the project he donated/recorded to the benefit album called “4 The Tears In Your Eyes.” The song was underrated and many consider it one of the best under-the-radar tracks of his career.