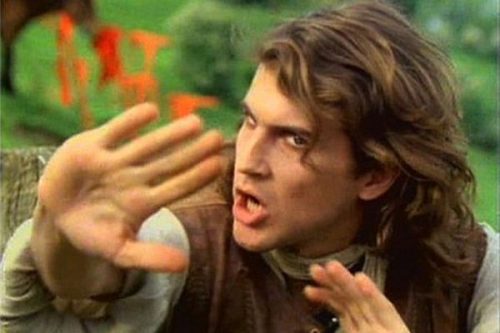 In a way, “Safety Dance” is terrible. Who cares!  If you’re not up dancing within the first two or three bars there’s something dangerously wrong with you.

As for the song’s meaning—does it really matter?.  If you must know, “Safety Dance” is about not conforming to what everyone else was dancing to.  In a 2012 interview with Pop Culture Addict, lead singer Ivan Doroschuk ties its origins to— poging.’

“Well, pogoing was the first sort of punk dance, which was basically jumping up and down,” Doroschuk said. “Slam dancing and the mosh pit all kind of grew out of pogoing.  So that’s where The Safety Dance kind of grew out of.  The inspiration for the song was from back in the days when Punk and “New Wave” were starting off and the discotheques were still playing disco music.  But every now and then they’d slip in Blondie’s Heart of Glass or Rock Lobster by The B-52’s.  Well, obviously, anybody who was into that kind of music would rush on the dance floor and start jumping up and down and would bang into the guys trying to do their disco two steps. I got thrown out of a lot of clubs because of that.  So that’s basically the origin.  I was kind of mad that they wouldn’t let me dance if I wanted to, so I took matters in my own hands and wrote an anthem for it.”

I was no more than 12 when this song came out, so that shit was a bit too deep to understand. I just wanted to spell out “S-A-F-E-T-Y-D-A-N-C-E” (the coolest part of the song) and dance around like an idiot… Mission accomplished.

Chart Success: It reached number-three on the Billboard Top 100 and stayed on the charts for 24 weeks. It did hit the top spot on the U.S. Billboard Hot Dance Club Play because why wouldn’t it?  It finished 1983 ranked 35th on the year-end Billboard Top 100.

Great Lyrics: I’m not sure what a victory cry is, but I certainly would like to learn.

Fun Fact: Men Without Hats is widely known as one of the 80s biggest one-hit wonders.  Wrong!  Nearly five years later the group had a single called “Pop Goes The World” reach the Top 20 on Billboard and stay on the charts for 21 weeks.  In the interest of full disclosure I’d never heard it before and recently looked it up on Youtube.  Yep, it pretty much sucks.