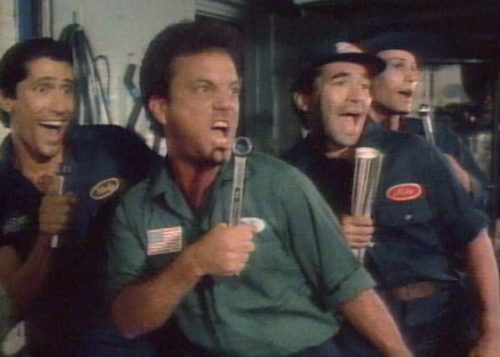 Being born and raised in the great state of New York, it can’t be overstated how smooth Billy Joel is.  He’s a New York City icon and his music is treasured by New Yorkers everywhere.  If he couldn’t get any cooler, the dude dated supermodels and not just any — we’re talking Elle Macpherson and (future wife) Christie Brinkley. Come on, man!

While Joel is far better known for his music in the 70s (Piano Man, Scenes From An Italian Restaurant, Moving Out—I can go on forever) his Grammy nominated An Innocent Man album in 1983 was a big hit critically and commercially.

While some (perhaps many) prefer “Tell Her About It” or “The Longest Time” my favorite was Uptown Girl.  Not only did I love the song, but the video was one of the hippest I’d had ever seen as a 12-year old and keep in mind—music videos had a much greater influence on pop culture during that era.

The song depicts a mechanic from the wrong side of the tracks in love with the sexy rich girl.  Of course, Brinkley is the hot chick in the video, tho Joel said the song originally started out being written about this then-girlfriend Macpherson.

Uptown Girl ultimately was nominated for a Best Pop Vocal Performance (Male) Grammy in 1984, losing to Michael Jackson’s “Thriller” because of course.

Chart Success: Peaked at number-three on Billboard and spent 22 weeks on the charts. It finished 39th on the year-end (1984) Billboard Top 100.

Great Lyrics:  The lyrics “backstreet guy” and “white bread world” in the same verse. I mean, how good’s that?

Fun Fact: Joel’s said in interviews that the song was inspired by Frankie Valli and the Four Seasons. Being armed with that information go back and listen to the song (or even better, watch the video) and you’ll see the homage is unmistakable. The song was a monster hit in the UK, the second-biggest selling single of 1983 behind only Culture Club’s “Karma Chameleon.”