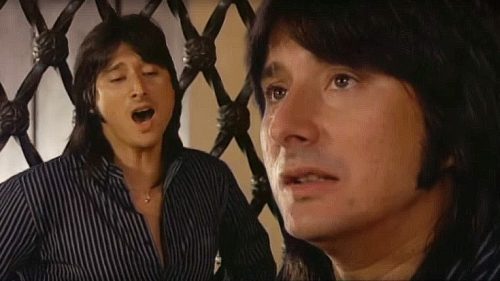 To no avail in 1984, a then 13-year old Patrick Moran frantically tried to score a girlfriend named Sherrie for the sole purpose  of singing Steve Perry’s “Oh Sherrie” to her.

Some 32 years later my buddy Tony hit the Sherrie jackpot, tho he insists on the Frankie Valli “Sherry Baby” reference instead—whatta waste.

For the longest time following this song’s release I was oblivious to it being a solo effort from Perry. It literally sounded like a Journey song to me, and unaware of any rift between Perry and the band.

Turns out Perry performing (his) song with Journey a few times would be his permanent exit from the band— a soured relationship that continues to this day.

I enjoy this record and the way Perry sang it in his trademark sound.  He’s arguably one of the best rock band frontmen in music history and while his career as a solo artist mostly flopped (he did have success with “Foolish Hearts” so don’t call him a one-hit wonder), this remains in heavy rotation on my 80s playlist.

Great Lyrics: (sung in an octane I could only dream of reaching)

Fun Fact: Perry and two other songwriters I don’t care enough to name penned this song in reference to his then-girlfriend Sherrie Swafford.  Perry told Dick Clark in an 1996 interview Swafford was present for the start of the session but grew tired and went to bed, which inspired the lyrics “Oh Sherrie” and “hold on”.  They then filled in the rest in what Perry called a “very personal song.”