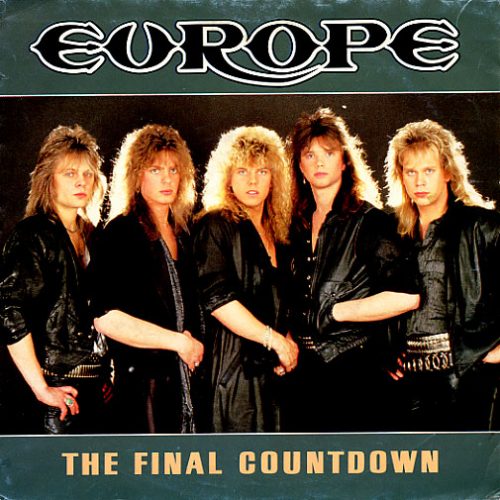 I was roughly 15-years old at the time this song came out and at once it became my essential training song.  Back in those days I felt reasonably confident I was just a few short years away from making my debut as a WWF superstar and the future tag team partner of Mr. Wonderful Paul Ordnoff (I always wanted to be a heel). While visualizing my worldwide squared circle supremacy, I went as far to envision “The Final Countdown” as my theme song while strutting down to the ring—greeted by a rousing course of boos.

In reality this song wasn’t really intended to get aspiring athletes fired up.  Inspired by David Bowie’s “Space Oddity”, it’s actually about taking a trip to Venus and leaving planet Earth behind—or something like that.

Who really gives a shit anyway?

Whether Europe intended so or not is irrelevant.  “The Final Countdown” became the backbone of sports anthems at arenas everywhere and remains so over 30 years later.

They keyboard riff at the beginning is one of the coolest things I’ve heard in my life.  It deserves to be on my countdown for that alone.  Everything about “The Final Countdown” is outstanding. It’s on the National Honor Society of all 80s music that’s gloriously cheesy.

Chart Success: It reached number-eight on the Billboard Top 100 and remained on the chart for 18 weeks. It didn’t finish in the 1986 year-end Billboard Top 100, which is clearly some bullshit.  It did finish number-one on the Netherlands year-end charts and third in France because both countries are way cooler.

Great Lyrics: If I had paid better attention as a 15-year old, I’d have put the curling bar down and wondered what the fuck this song is even about.

“We’re heading for Venus (Venus)
And still we stand tall
‘Cause maybe they’ve seen us (seen us)
And welcome us all, yeah
With so many light years to go
And things to be found (to be found)
I’m sure that we’ll all miss her so”

Fun Fact: On of the all-time bogus fabrications is that Europe is a one-hit wonder with this song. It even made VH-1’s list of 100 Greatest One-Hit Wonders.  “The Final Countdown” wasn’t even their biggest hit on the album!  “Carrie” reached as high as number-three on the charts, and “Rock the Night” was a third hit that cracked the Billboard Top 30.