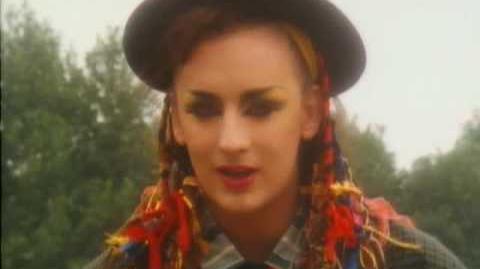 Alright, man. I know Karma Chameleon isn’t the most masculine song on my countdown.

Variety is the spice of life, my friend.

This song came out when I was 12 years old and at the time it felt like the world’s coolest nursery rhyme.

In a 2003 book titled The Billboard Book of Number One Hits, Boy George explained what Karma Chameleon was actually about.  “The song is about the terrible fear of alienation that people have, the fear of standing up for one thing,” he said. “It’s about trying to suck up to everybody. Basically, if you aren’t true, if you don’t act like you feel, then you get Karma-justice, that’s nature’s way of paying you back.”

At the time Boy George was having a secret relationship with the group’s drummer, Jon Moss and many of the lyrics were cryptically written for him.

I don’t care if Boy George was lusting over Madonna or Lionel Richie, what really counts is this song’s ability to turn any party up, regardless if it’s 1983 or 2017.

When I was a teenager enjoying this was sort of a guilty pleasure. Let’s face it— back in the 80’s they were a group no one claimed to like, yet everyone was buying their albums. For me that was mostly true. I wasn’t a fan of most their music, but this was definitely my favorite Culture Club song.

Back then I wouldn’t admit it. Today, I’m unapologetic about it.

Great Lyrics: Didn’t know at the time, but these were some pretty clever lyrics that conveyed what we now know is the meaning of the song.

Fun Facts: This was Culture Club’s lone number-one hit.  They came close with singles that peaked at number-two, twice with Do You Really Want To Hurt Me & Time (Clock of my Heart). They ended up having six hits in the Top 10 (Miss Me Blind, I’ll Tumble 4 Ya and Church of the Poison Mind).

39. Bruce Springsteen -Dancing In The Dark