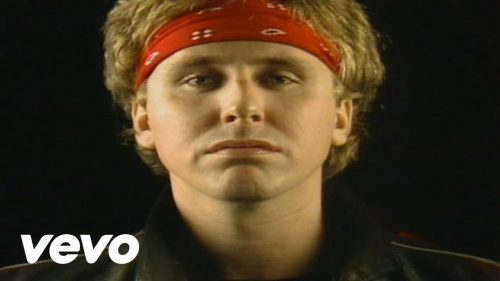 When I commenced this countdown several weeks ago, I knew there’d be at least a handful of selections readers glance to and immediately question my musical taste if not my sanity or manhood all together.  To those critics I say— tough shit.

This is a daily rundown of my favorite 80s songs, not necessarily its biggest chart toppers or most critically applauded hits.

Corny perception or not, I was unapologetically a huge fan of Loverboy in the 80s and still love re-living their records today.  Loverboy was the first rock concert I ever attended as a kid and several years later (1999 to be exactly) a Loverboy show (along with Pat Benatar) became my first date with my future wife (who’s not nearly as big a fan).

Loverboy never enjoyed the commercial success as  early to mid-80s rock band colleagues like Styx, REO Speedwagon and Foreigner (some may question labeling these groups and Loverboy together as colleagues), but hate on, haters—- I liked Loverboy just as much.  The group had plenty of solid rock songs to my liking, including “The Kid Is Hot Tonite”, “Working for the Weekend”, “Turn me Loose”, “Lucky Ones” and “Loving Every Minute Of It.”

For me their best was “When It’s Over”, which depended mightily on synthesizers.  Like most their work, the lyrics are pretty much nonsense if not garbage, but all that counted for me were the vocals of frontman Mike Reno—one of the most gifted and enigmatic songsters of the era, not to mention the pioneer of sporting corny red headbands when performing.

Call this tune one of my favorite guilty pleasures. My guess is you’re calling it something far less flattering.

Uhhh, Lyrics: Normally this section is titled “Great Lyrics” but I can’t even lie—the lyrics sound like they were written by some kid who barely had hit puberty. It’s just terrible.  However, it matters not when the great Mike Reno is belting them.

‘Cause deep, deep down inside
You’re living in a life in total lies”

Fun Fact: While Loverboy was a well-known band in the 80s they weren’t exactly chart stompers.  The group never had a single reach higher than ninth. In total they had eight Top 40 hits, led by “Lovin’ Every Minute Of It” it’s highest at nine.