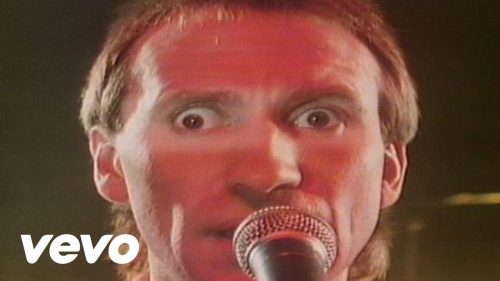 Chances are if grew up during the 1980’s, Men at Work were part of your album collection.  Off their first-rate Business As Usual debut came my favorite single, Who Can It Be Now.  Truthfully, it’s of the most entertainingly senseless tunes ever recorded. Lyrically it’s no masterpiece. It took many years and air-sax practice to come that conclusion but I’m at peace with it.

I was 11-years old when the single came out and it instantaneously felt rooted into my DNA.  I was hooked the first time I heard it—loved the sax playing and unique singing voice I was hearing.  Playing Who Can It Be Now became part of my daily routine, such as my morning bagel and glass of chocolate milk.

Everything about this song was is gratifying, from the aforesaid impressive sax playing to the broad rock feel with a marriage to the new wave sound. I’m too young to know if karaoke was a thing in the 80’s but if it were I’d wager this would be one its most popular selections. As a group Men at Work were the Cinderella story of the new wave movement, and by Cinderella I’m talking glass slipper not authors of heavy metal jams like Don’t Know What You Got Til It’s Gone. They came out of Australia and seemingly overnight broke down the walls of American pop music, becoming the top-selling group of 1982.

Their ambush on the Billboard charts was led by Who Can It Be Now (and also Down Under), both soaring to number-one.   The former was their first single.

Their success was significantly abetted by MTV, who had their quirky video about a paranoid man alone in his house in heavy rotation.

Who Can It Be Now signified a stimulating time of my pop music/new wave education as a youth back in 1981, and it’s a standard on my IPod playlist during social gatherings to this day.

Chart Success:  Who Can It Be Now reached number-one on the Billboard Hot 100 for a week, sandwiched before Joe Cocker/Jennifer Warnes (Up Where We Belong) and after John Cougar (Jack and Diane). It stayed on the charts for a whopping 27 weeks and finished 1982 ranked 30th on the year-end Billboard Hot 100.

Great Lyrics:  They lyrics were inspired by lead singer Colin Hay being hunted down by debt collectors. Dude just wanted to be left alone.

“Who can it be knocking at my door?
Go ‘way, don’t come ’round here no more.
Can’t you see that it’s late at night?
I’m very tired, and I’m not feeling right.
All I wish is to be alone;
Stay away, don’t you invade my home.
Best off if you hang outside,
Don’t come in, I’ll only run and hide.”

Fun Facts: Business As Usual album spent 15 weeks at number-one on the U.S. Billboard charts, a record at the time for a debut album. Down Under also gave the album a lot of support, joining Who Can It Be Now as chart topper Billboard singles. Unfortunately the band didn’t exactly have staying power. They put out two more albums before the band bottomed out and broke up: Cargo (1983) and Two Hearts (1985).