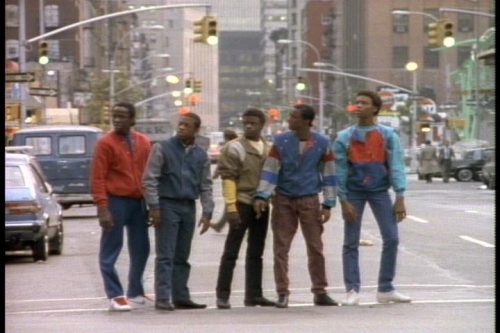 Before there was One Direction, N’Sync, Backstreet Boys and a million other boy band groups including late 80s phenomenon New Kids on the Block, there was New Edition.  Not since their arrival to the pop music scene have I enjoyed a group more.

The group was originally discovered by Maurice Starr in 1981 at a Hollywood Talent Night in Boston, where they finished in second place (I’d love to have seen the group that finished first). Ironically Starr would go on to form New Kids on the Block a handful of years later.  The name “New Edition” was meant to be in reference to the group being a new version of the Jackson Five.

As awesome as this song was, the video was even better— a simple video about 5 kids pleading with the telephone operator to get Bobby Brown’s girlfriend, who for some reason was steadfastly refusing to answer his calls, on the line so he can talk to her and I presume try to win her affection back.

I was always blown away by how successful the members of New Edition would go on to be as individual artists and a group.  Of course, Brown’s stardom rose through the roof but Ralph Tresevant and Johnny Gill were underrated impressive solo artists, while BBD (Bell, Biv, Devoe) became one of the more successful R&B groups of the 90s.

Still, as great as they were individually their best stuff was as a group, whether it was the original version with Brown or later on Gill.

Chart Success: Mr. Telephone Man was a moderately successful hit single in the United States. It peaked at No. 12 on the Billboard Hot 100 and reached the top spot on the Hot Black Singles chart. It would spend 16 weeks on the billboard charts but didn’t finish on the 1984 year-end Billboard Hot 100.  Boo.

Great Lyrics: Was there ever really a computer service that could be reached by dialing 611?

“When I dial 611 Computer Service
She said “Hello may I help you, please?”
I told her something must be wrong with my phone
‘Cause my baby wouldn’t hang up on me

Mr. Telephone Man
There’s something wrong with my line
When I dial my baby’s number I get a click every time”

Fun Facts: This song was actually written by Ray Parker Jr., he of “Ghostbusters” fame.  Parker wrote the song in the 1970s while in a group called Raydio but never recorded it.  It was originally recorded and released a year before in 1983 by a reggae singer named Junior Tucker, but the song never took off with Tucker.