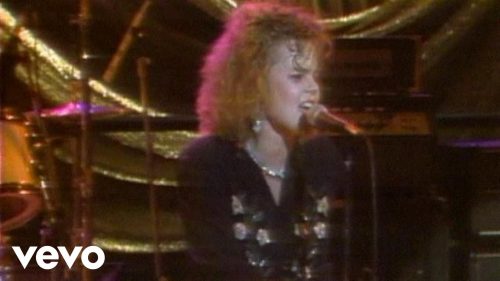 When music fans think of history-making acts, few jump in to mention the Go-Go’s.

Here’s a quick trivia question. How many all-female acts had an album soar to the top of the Billboard charts in which said group sang, played and wrote all of their own material aside from The Go-Go’s? The answer would be none. No one else ever did what these ladies accomplished with their “Beauty and the Beat” album in 1982.  To make the achievement even more amazing, it was their debut album!

We Got The Beat was my jam (way) back in the day.  From the harmonious bass line to the pounding of the snare drum, this song brought so instant vivacity whenever it was on the radio.  Of course, what gave We Got The Beat that extra oomph was the catchy singalong chorus and unison handclapping.

The fact We Got The Beat was featured in one of my favorite 80s movies ever, Fast Times at Ridgement High only enriched my affection for it.

Many out there prefer The Bangles as the preeminent 80s all-girl rock group but I was a Go-Go’s guy—and for me this song of theirs led the way.

Great Lyrics: Ok, Ok— I simply can’t sell you on this song being lyrically outstanding. Just hit that snare drum, start clapping and it’ll be all good.

Fun Facts: When the Go-Go’s first formed in 1978 three of the four members didn’t know how to actually play instruments, but faked it while learning so on the fly. Things really changed when lead singer Belinda Carlisle asked guitarist Charlotte Caffey, who was an established guitar player to join the group. She did, leaving her band (The Eyes) and the rest was history. Including this the group went on to have four Top 20 hits: Vacation, Our Lips Are Sealed and Head Over Heels.