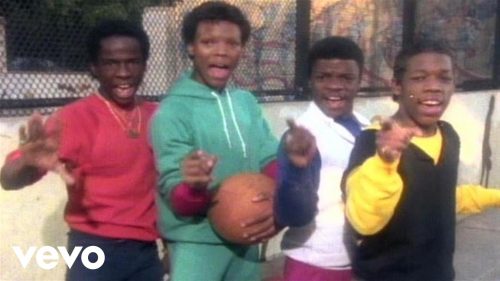 That has to be among the most reminisced one-liner lyrics from the 80s, regardless of music genre preference.

The most ironic thing about Cool It Now is that it’s a song that nearly didn’t get made—not by New Edition anyway. As the story goes songwriters Vincent Brantley and Rick Timas penned it specifically for New Edition to sing.  However, they were unable to get a hold of any major execs at MCA. One night the writer duo followed MCA vice president Jheryl Busby to a diner and literally pulled out a cassette demo of the song and started signing over it.  Busby liked it, told Brantley and Timas to come to the studio the next day and the rest is history.

I personally regard New Edition as the definitive blueprint for everything a boy band should be; from appearance to dancing and course, unrivaled vocal harmonies. I know New Kids on the Block were the ultimate boy band obsession before the decade was over but sorry folks—New Edition was flat-out better.

In the mid 80’s New Edition were the boys next door, falling for teenage love and looking to have the time of their young lives. That shines through on a lot of their music and especially with this song—my personal favorite by the group. A pioneer tune, Cool It Now was one of the first R&B/pop music hits to feature a rap interlude.

Unlike many other New Edition songs including Mr. Telephone Man (No. 44 on this list) where the group often rotated with solos, Cool It Now was all about Ralph Tresvant in the lead with the other members (Bell/Biv/Devoe and Bobby Brown) settling for the refined harmonies in the background.

The video is fun, with Tresvant basically discounting his boys on the basketball court because he’s completely smitten with a girl. I mean, he’s literally singing and dancing on the court instead of trying to hit open shots from the perimeter, prompting the New Edition crew to cautiously warn Ralph to “cool it now”.  The rest of group turns to rap to provide words of wisdom to Tresvant but it only results in him calling out his boys with a rap of his own, climaxing with the famous aforementioned line at the top—because if he loves the girl who cares who you like.

It’s one of the best bubblegum R&B anthems of this or any decade.

Great Lyrics:  This is what happens when you have unsupportive friends.

“Why you all coming down on me
Tryin’ to tell me how my life is supposed to be
I know you’re only trying to help me out
Tryin’ to show me what life is really about
But this time I’m gonna make it on my own
So why dontcha fellaz just leave me alone
Ronnie, Bobby, Ricky and Mike
If I like the girl who cares who you like”

Fun Facts:  Brantley and Timas weren’t a one-hit wonder for New Edition. They also produced “Count Me Out”, which reached number-two on the Billboard R&B charts.  As for the group, Brown left in 1986 and was replaced by Johnny Gill. The rest of the group eventually split in 1990 and each had successful solo Pop/R&B careers, none so more than Brown.