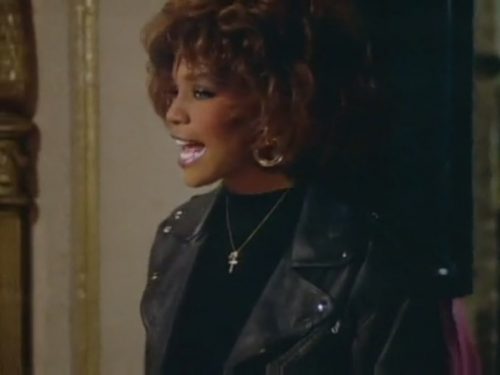 If you’ve followed this countdown thus far, I offer your biggest takeaway—-George Benson originals ain’t shit compared to those that’ve covered him.

Benson originally recorded “Nothing’s Going To Change My Love For You”, which eventually was covered by Glenn Mederios and a huge hit in 1986 (No. 86 on this countdown).

Benson first recorded “Greatest Love of All” in 1977 for the movie soundtrack “Muhammad Ali, The Greatest” with modest success. Years later Whitney Houston recorded the same song, done much bigger and quite obviously, better.  It was the fourth single released from her epic self-titled album in 1985.  It became her biggest hit off the album and rightfully so.

Houston’s vocals have always blown me away, perhaps like no other artist since the first time I’ve ever heard her.  I only have a few (two to be exact) on this countdown but truth be told, I could easily have a half dozen or more.  The biggest problem I have with Whitney is trying to decipher which of her songs I like best—no easy task. It’s like being ambushed with a barrage of Mike Tyson punches circa 1996—you’ll feel each one of them.

Among countless reasons I love this song, “Greatest Love of All” was our eighth grade graduation theme.

Chart Success:  “Greatest Love of All” rose all the way up to number-one on the Billboard Top 100, where it spent three weeks in May at the top and 20 weeks on the charts overall .  It finished 1986 at No. 71 on the year-end Billboard Top 100.

Great Lyrics:  Maybe I gave the lyrics more credits than was deserved, but I always found them inspiring.

Fun Fact: Whitney Houston’s “Greatest Love of All” wasn’t supposed to be hit.  Originally it was merely the B-side of “You Give Good Love” (a great song in its own right).  However, when Greatest Love started receiving heavy air play on radio, the record company (Arista) then released it as a single.