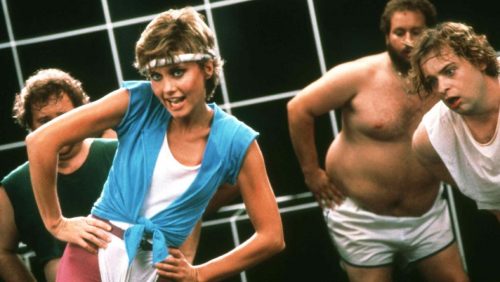 I should probably provide a little context that accompanies this selection.  I don’t think Olivia Newton John’s “Physical” is one of the more exquisite songs of the 80s.  It’s simple and borderline corny.  However, what made it so fantastic was the insanely sexual overtures that both boys and men (and I’m sure many females for that matter) spent a nice chunk of the decade fantasizing over.

Here’s the truth— Olivia Newton John was the first true celebrity crush of my life. I’m not joking. I legitimately recall having one of her posters, locating the address in tiny print on the bottom right corner and handwriting her “I’m your biggest fan” letters in hope I’d receive something from her in return (I never did and sadly neither did I for the other celebrity woman in my life, Deborah Harry).

Olivia Newton John could have literally released a song of her exclusively farting on a record for 3 minutes and 22 seconds and I’d have waited in line to purchase it at Record Theater on Main Street in Buffalo, after mooching the funds from my mother.

That’s not to say “Physical” wasn’t a good song.  It was.  Hell, this song was the unofficial national anthem for aerobic classes and sweaty workouts of its kind.

Even more so, it was a change of style for John, who previously was best known as sweet teenager Sandy from the epic musical Grease and puffy tunes from the Xanadu soundtrack.

In “Physical” you hear John very transparently singing about having sex.  The video is sexually charged as well, as John is teasing fat dudes trying to get their fitness on but can’t because they’re staring at her.

Trust me, I was too.

It also dominated the pop charts like few others ever have. How much?

Great Lyrics: Olivia Newtown John became perhaps the first singer ever to use the term “horizontally” when describing having sex.  You go girl.

Fun Fact: This song spent the most consecutive weeks at the top of Billboard since Elvis Presley’s “Hound Dog”.  The biggest loser of this song’s success was Foreigner, as their “Waiting For A Girl Like You” hit came in on Billboard second for nine of the 10-week John reign.  Hall & Oates’ “I Can’t Go For That” (No. 100 on this countdown) finally broke the run.  (Credit to Songfacts for those stats).