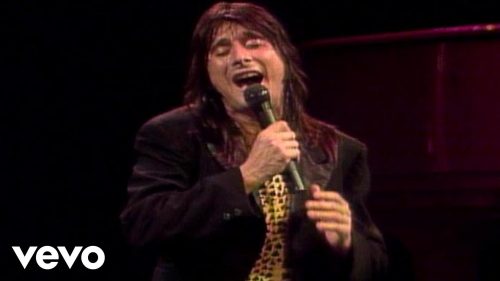 Here’s a fun story about “Open Arms” I was oblivious to until recently.  Every 80’s fan recalls John Waite, who scored a huge hit single with “Missing You” in 1984, right? That’s actually a rhetorical question.  Anyway, years before his one-hit wonder Waite was in a British rock group called the Babys, and had Waite liked the melody, “Open Arms” would’ve never been Journey’s song sing and make into an iconic ballad.

According to the story told by Songfacts, song co-writer (and Journey band member) Jonathan Cain co-wrote “Open Arms” while with Waite in the Babys, and the song was originally pitched to Waite, but he wasn’t a fan.

“Jonathan Cain came to Journey with this melody already written. It could have been a song for the Babys, his previous band, except that Babys vocalist John Waite rejected the melody as “too syrupy.” He sheepishly showed the tune to Perry on his portable Wurlitzer keyboard and Perry immediately wanted to do it. The rest of the band wasn’t so sure.

“They were opposed to the ballad,” said Perry. “Neal hated the idea and Jon Cain thought maybe John Waite was right.”

He wasn’t right, not even close.  “Open Arms” is literally an O.G. when it comes to power ballads in the 80s, or any other era for that matter. If it’s not the first true power ballad it’s certainly among them.

There’s nothing complicated about the song—a ditty about a couple who were in love but drifted apart before finding each other again.

Essentially, the only thing that sets “Open Arms” apart from countless other ballads is Perry’s unrivaled vocal abilities.

VH1 named it the best power ballad of all-time.  Who are you or I to disagree?

Chart Success: The group’s biggest hit ever, “Open Arms” reached number-two on the Billboard Top 100 and remained one spot off from the top for six consecutive weeks. It finished 1982 ranked 34th on the Billboard year-end Top 100.

Fun Fact: Mariah Carey covered “Open Arms” in 1996 off her “Daydream” album.  The album itself is one of the most successful of the decade, featuring mega hits “Fantasy”, “One Sweet Day” and “Always Be My Baby”.  However, Carey’s version of the Journey classic, in this author’s opinion was a huge pile of shit.