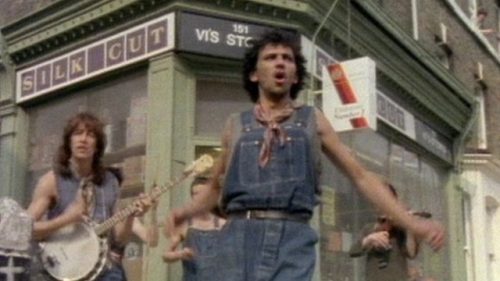 There’s a plethora of British music groups from the 80’s who dropped a chart topper before seemingly disappearing forever, but merely a handful where that one-hit wonder truly stands the test of time. In my opinion, Dexys Midnite Runners are one of them.

Come On Eileen is one of the most known and appreciated ditties of the decade and understandably lumped with many one-hit wonder songs from the era. However, unlike most songs, especially those from the “new wave” invasion, Come on Eileen didn’t feature synthesizers but instead a banjo, fiddle, saxophone and accordion.

The intro is one of pop music’s most decipherable – a solid lil’ baseline tease, full blown fiddles having you ready to clap and stomp, and of course the trademark “C’mon Eileen!” shout before springing into the first verse.

The song was actually based on a true story. Co-written by lead singer Kevin Rowland, Eileen was a girl Rowland grew up with and had a relationship with by the time they were teenagers. It would soon turn sexual.

As for how the song came together, Rowland said in an interview with Songfacts.com “We wanted a good rhythm and we found one. Lots of records we liked had that rhythm: ‘Concrete and Clay,’ ‘It’s Not Unusual’ by Tom Jones. Lots of records we liked had that ‘Bomp ba bomp, bomp ba bomp.’ We felt it was a good rhythm. We came up with the chord sequence ourselves and just started singing melodies over it. I remember thinking, ‘We’re really onto something here. I came up with that, ‘Too ra loo ra,’ and I remember thinking, ‘Wow, this is sounding really good.’ You get a feeling when you’re writing a song. Something happens. And in the end it kind of finished itself.”

As aforementioned, it’s one of the 80s most proverbial songs. However, this isn’t a countdown of tunes fans even with limited knowledge of 80s music can sing along with.  Come On Eileen makes this list on the merits of being fantastically cool.

Chart Success: The song shot all the way up to number-one on the Billboard Hot 100 and in doing so knocked off Michael Jackson’s “Billie Jean” from the top spot. It spent 23 weeks on the charts and finished 1983 ranked 13th on the year-end Billboard Hot 100.

Sounded sad upon the radio

Moved a million hearts in mono

Our mothers cried, sang along

Who would blame them?”

Fun Facts:  Americans weren’t the only music fans in love with Come On Eileen. It also reached the top of the charts in Australia, Belgium, Ireland, New Zealand, Switzerland and of course the United Kingdom.