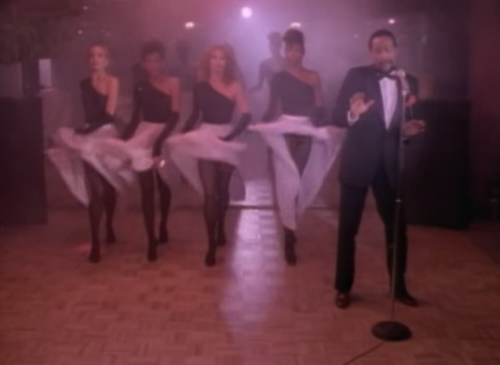 Everyone knows Marvin Gaye’s “Sexual Healing” is the preeminent song to get down to.  Not everyone knows is exactly how America’s unofficial humping anthem came out. It turns out Gaye was quite the pornography addict.

“The renown writer David Ritz gave Gaye the idea for this song. Gaye had a large collection of pornography, to the point that many of his friends felt he was addicted to porn. When he noticed the collection, Ritz told Gaye he needed some “Sexual Healing,” and Marvin had him write some words which became the lyrics to the song. Ritz told Songwriter Universe: “As I was writing the lyric, I was trying to capture Marvin’s voice and style as a singer. He said, ‘That lyric sounds like me.’ The lyric seemed to fit into his philosophical musings and his personal, emotional needs, so he could sing about it with complete honesty.”

The video is no less hawt—- four attractive dancers surrounding Gaye suggestively as he sings away a smoky bar sporting a smooth black tux.   Of course, there’s cutaway scenes of Gaye at a naughty female doctor’s office, getting a physical examination before being prescribed some midnight love potion, sealed with a kiss.  I wish I knew lady doctors like that.

Marvin was the man and I loved this song at far too young an age as I probably should’ve.  Sadly this was Gaye’s last major hit.

Great Lyrics: There’s some singers so blessed they could sing literally any lyric and make it sound sultry.  Gaye was one of those rare birds.

“Baby, I’m hot just like an oven
I need some lovin’
And baby, I can’t hold it much longer
It’s getting stronger and stronger

Baby, I got sick this mornin’
A sea was stormin’ inside of me
Baby, I think I’m capsizin’
The waves are risin’ and risin”

Fun Fact: Want to talk about staying power—- Gaye had a top three hit in three different decades: I Heard It Through The Grapevine in the 60s (1968), “Let’s Get It On”, What’s Going On” and “Got To Give It Up” in the 70s and Sexual Healing in ’83.  Who knows how many more he would’ve had if his life wasn’t tragically cut short by his father’s murder one year later in 1984.