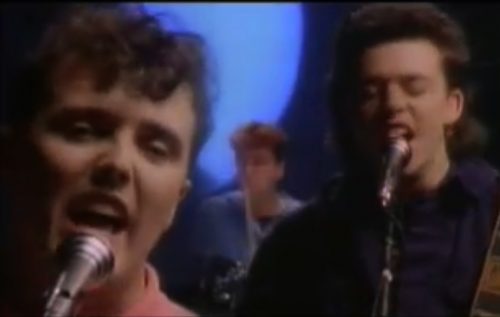 I must insert a few disclaimers before proceeding. First and foremost, I wasn’t a Tears for Fears fan. In fact, there were exceptions for sure but generally I wasn’t into the whole 80s England pop/new wave influx on American music.  Lastly, many consider “Shout” the group’s signature song.  I personally found it annoying. Apologies to the ardent Tears for Fears fans out there.

As for Everybody Wants to Rule the World, I didn’t particularly care for the song’s serious message.  Band co-founder Curt Smith once explained on the band’s website “Although musically this is quite a jangly and catchy song, its lyrical theme is actually pretty dark. “The concept is quite serious — it’s about everybody wanting power, about warfare and the misery it causes,” Curt Smith explains on the band’s website.”

Despite the numerous reasons I listed to change the dial when it’d come on the radio, I simply couldn’t help but sing along.  This song was freegin’ addicting.  It was discernible the band recorded this song with one clear undertaking — breaking through with the American audience.  The mission was successful.   To be perfectly honest I wouldn’t say the lyrics flow together perfectly, but what mattered far more is that the song sounded well and to this day, the chorus is one of my favorite singalongs of the entire decade.

Seriously… I physically can’t listen to the chorus without singing along.

Chart Success: This song was incredibly successful on the charts. It reached number-one on the Billboard Hot 100 and held the top spot for two weeks before being knocked off by Bryan Adams’ “Heaven.” It finished 1985 ranked seventh on the year-end Billboard Hot 100.

Great Lyrics: It may not look great on paper but I double-dare to play this and not singalong.