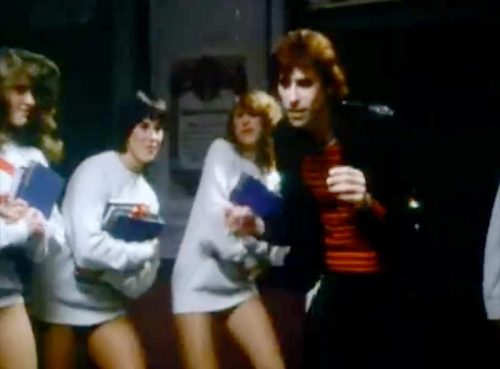 Many think the J. Geils Band suddenly erupted on the scene in 1981 with their smash hit Centerfold, but for more than 10 years prior the band toured the country sans the benefit of a single top 10 hit.

That changed, seemingly in the blink of an eye as the MTV era rolled in. Centerfold was one of the first I remember to be in the station’s heavy rotation (I was around 10 at the time) and the video itself was among the most trendy during those MTV’s infancy days.

The video depicts the band performing the song in a classroom, accompanied by a bunch of hot chicks dressed up in catholic school uniforms—of sorts carrying class books.

In reality the song was about a guy crushing on a girl in high school who appeared to be the girl next door— unsullied in every way (lyrics include referring to her as his “homeroom angel” and “pure like snowflakes”), only years later seeing her wind up as the centerfold of a “girly” magazine, much to his dismay.

Some songs are commercial successes while others “settle” for being regarded as critically acclaimed. The best tunes are a combination of both. Centerfold checks both boxes for me—a true 80’s classic.

Chart Success: Centerfold hit number-one on the Billboard Hot 100, the band’s only chart topper and it stayed on top for a whopping six weeks. It spent 25 weeks on the charts and finished 1982 fifth on the year-end Billboard Hot 100.

Great Lyrics: Unfortunately, the video never shows if (lead singer) Peter Wolf ever makes it to the motel room with the girl of his high school dreams.

“It’s okay, I understand
This ain’t no never-never land
I hope that when this issue’s gone
I’ll see you when your clothes are on
Take your car, yes we will
We’ll take your car and drive it
We’ll take it to a motel room
And take ’em off in private”

Fun Facts:  This was truly the pinnacle of the band’s success—and existence.  Wolf left the group in 1983 after several disagreements on the group’s direction.  Seth Justman took over as lead singer and the group put out one more album, which pretty much sucked.  They broke up in 1985 and stayed that way for 14 years before reuniting multiple times.