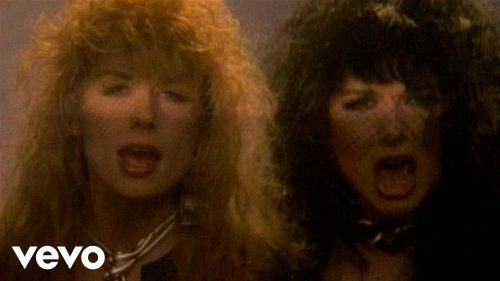 All except for Heart—-of course.

The 2013 inductees into the Rock and Roll Hall of Fame prepared a virtual smorgasbord when it came to awesome rock hits.  From 70’s classics like “Barracuda”, “Crazy on You” and “Magic Man” to their continued success in the mid-80s with ditties such as “Never”, “These Dreams” and “What About Love”, Heart as much staying power on the rock scene as anyone, regardless of genre.

My favorite Heart song came off their 1987 “Bad Animals” album with “Alone”; the number 54 song on this countdown.  Simply put, in my opinion no woman on earth before or since sings with more strength, believability and conviction than Ann Wilson.  That’s never on display more than with this classic.

Chart Success: This song reached number-one on the Billboard Top 100 because why wouldn’t it? It spent three weeks in July at the top before being knocked off by Bob Segar’s “Shakedown”.  In total it spent 21 weeks on the charts and finished 1987 ranked second on the year-end Billboard Top 100.  “Walk Like An Egyptian” (spoiler alert—not on this countdown) by The Bangles finished first.

Great Lyrics: Wilson can sing just about anything and it would come off as good but vocal prowess aside this song had some outstandingly depressing lyrics.

Fun Facts: Although Heart wrote many of their own songs, especially during the early part of their careers, “Alone’ was actually written by the songwriting team of Billy Steinberg and Tom Kelly, who together penned other top hits in the 80s including “So Emotional” (Whitney Houston), “Like A Virgin” (Madonna) and “Eternal Flame” by the Bangles.  “Alone” was one of two Heart number-one singles, with the other being “These Dreams”.  The song caught on with a whole new generation of fans after Carrie Underwood performed it as a contestant on American Idol in 2004.