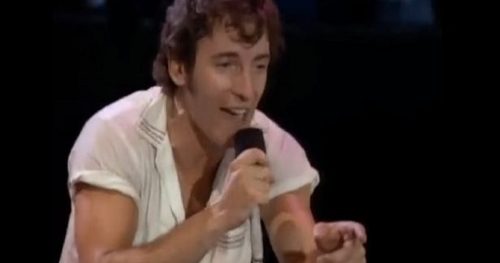 Hey, did you know that in the video for Dancing in the Dark, future mega-star Courtney Cox goes from enjoying Bruce Springsteen’s song in the crowd to being invited on stage to dance with him? Oh, you did?  Yes, because the entire world knows it.

I love Dancing in the Dark and don’t give a shit about Cox being in the video. To this day it drives me bat shit crazy when people overshadow this brilliant ditty by always mentioning Cox appearing in the video. I barely liked watching her in Friends several years later. Who cares!

When I was 13 I enjoyed the song because of its eccentric synthesizer sounds, drum beats and plus I simply liked Springsteen’s voice.  What’s not to like about the Boss’s singing capacity? The dude’s vocals are piercing, rasping and coarse—which fits like a glove on this song.

As I got older I gained a better appreciation for the song’s lyrics. While Dancing in the Dark has a catchy beat and the accompanying video (heavy in MTV’s airplay rotation) suggests it’s just a fun ole’ party, Springsteen actually writes about having a hard time trying to pen a hit single and the frustration that comes with trying to make a song that’ll please everybody.

It’s also worth mentioning that some hits from this decade hold a special place in my heart for a variety of reasons. Such as I’d written five entries ago with Born in the USA, Springsteen was one of my dad’s favorite singers, and enjoying some of his songs together was extra special.  None more so than Dancing in the Dark—my favorite Bruce song of em all.

Chart Success: Dancing in the Dark peaked at number-two on the Billboard Hot 100 and reached the very top of the rock charts. It stayed on the charts for 21 weeks and finished 1984 ranked 14th on the year-end Billboard Hot 100.  It was the biggest hit in Australia that year.

Great Lyrics: There’s also an unconfirmed theory that the Boss is simply talking about hooking up and getting him some.

“Stay on the streets of this town
And they’ll be carving you up alright
They say you gotta stay hungry
Hey baby I’m just about starving tonight
I’m dying for some action
I’m sick of sitting ’round here trying to write this book
I need a love reaction
Come on now baby gimme just one look”
Fun Facts: This was the last song Springsteen wrote for his Born in the USA album. He wrote the song in just one night after being prodded by his manager, Jon Landau to write a hit single for the album. It ended up being the first single off the album and the biggest hit of his career.