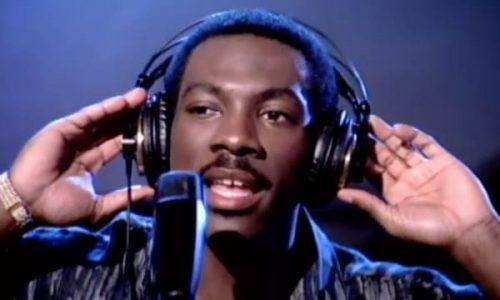 If you’re too young to have been around for the 80s, think Kevin Hart.  With his success in stand-up comedy and the big screen, I suppose Hart’s the modern day equivalent to Eddie Murphy, although personally I don’t think Hart holds a candle to Murphy’s popularity back in the day.

Murphy pretty much saved Saturday Night Life from extinction and was a massive movie star through most the decade, starring in Trading Places, 48 Hours and Beverly Hills Cop while also filming his stand-up comedy special Delirious in early 80s.  In the later half of the decade Murphy made Beverly Hills Cop II, Coming to America, Harlem Nights and Another 48 Hours while filming what many argue is the greatest feature-length, stand-up special ever, Raw.

In between all that Murphy became a huge singing star in 1985, at least temporarily with the release of Party All The Time.

Those of us who grew up or were adults in this era weren’t stunned to see Murphy record a hit pop song, as everything he touched back then turn to gold.  Party All The Time was written, produced and arranged by Buffalo native Rick James, which made the song a little extra special for us fellow Western New Yorkers.

Speaking candidly, the song’s way too contradictory for some.  One of the keys to a great tune lies in its authenticity yet there Murphy was—one of the most notoriously celebrated bachelors on the face of this earth grieving his girlfriend’s partying ways, sitting home alone each night home wondering where she is. The Eddie Murphy we knew would’ve been out banging anything that moves to gain revenge on his trifling girlfriend, not mourning her fondness for being away from home.

Party All The Time could also be the poster child musically for all that is cheesy in the 80s—from the overused synthesizers to the wash-rinse-repeat formula of the song itself.

None of that matters. It’s a ridiculous song, sure—yet so God damn catchy. Even if I don’t want to get reeled in by the hook I can’t resist. It’s so consummately listenable.

I probably should be ashamed at having this anywhere on my countdown let alone so high but I’m not.  I embrace the wonderful cheesiness of this classic—and like it or don’t that’s exactly what it is—an 80s classic.

Chart Success:  Because it was relentlessly played on the radio seemingly each minute of every day,  Party All The Time rose all the way to number-two on the Billboard Hot 100 and stayed on the charts for 22 weeks. It finished 1986 seventh on the year-end Billboard Hot 100.

Great Lyrics:  As mentioned, James did everything for this song except sing all the lyrics himself.  Perhaps he should’ve, as Party All The Time charted higher than any song James ever recorded himself, including Superfreak.

“I’ve seen you in clubs just hanging out and dancing.
You give your number to every man you see.
You never come home at night because you’re out romancing.
I wish you bring some of your love home to me.

Fun Facts: Murphy, perhaps unfortunately was a pioneer of sorts for celebrities making “hit” records in the 1980s.  Not long after Party All The Time came Miami Vice star Don Johnson with “Heartbeat” and about a year later Moonlighting star Bruce Willis recorded “Respect Yourself.” By comparison, Murphy’s song was a John Lennon’esque masterpiece.