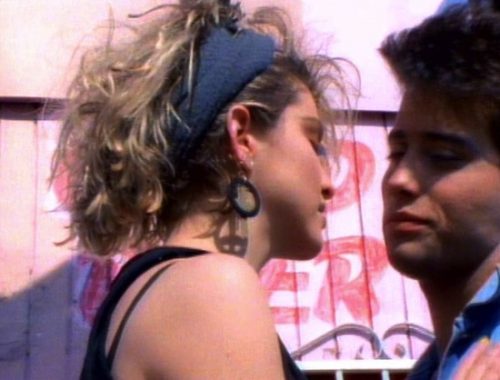 Look, I can liter my countdown with Madonna songs and hardly anyone would protest. She’s music royalty and it began in the 80s.  Here’s a spoiler —you’ve already seen Madonna prior to this entry and it won’t be the last time either, not by a longshot.

I can give you intelligent culturally –charged, enlightened explanations for her appearance on my countdown twice already but here’s the fact— I just straight up love me some Madonna.  She was hot. She could sing. She could dance, and when “Borderline” came out when I was 12 or 13 years old, I was obsessed.

The fifth single off her self-titled 1983 debut album and in my opinion her best song off it, “Borderline” was one of her early classic pop-dance tunes that defined a decade musically, irrespective to race or gender.  Madonna was someone everyone liked and I don’t care what your general musical preference was.

I was a fan of not just the song but the accompanying music video as well, although at my age I simply interpreted it as a chick liking some street dude and wanting to shake her ass to the beat.   Of course, years later I realized the video had plenty of culture significance, including interracial dating.  In the video Madonna is wooed by a British photographer while having a Latino boyfriend.  I suppose I could dig deep and philosophize on ya’ll, but just scroll down and watch the video for yourself.

Take from it what you will, or be like my inner 13-year old and take nothing at all. It’s a fun video, and even better song. Stop overanalyzing everything!

Great Lyrics:  Admittedly this isn’t exactly one of her lyrical masterpieces, but I dare you to have this song come on the radio and turn it off.  Don’t @ me.

“Something in your eyes is makin’ such a fool of me
When you hold me in your arms, you love me ’til I just can’t see
But then you let me down, when I look around
Baby, you just can’t be found
Stop driving me away, I just want to stay
There’s something I just got to say.”

Fun Fact: This was Madonna’s first top ten hit. In all she has 37 Top 10 hits to her credit, the most Billboard Top 10’s in music history, and that includes Elvis Presley.