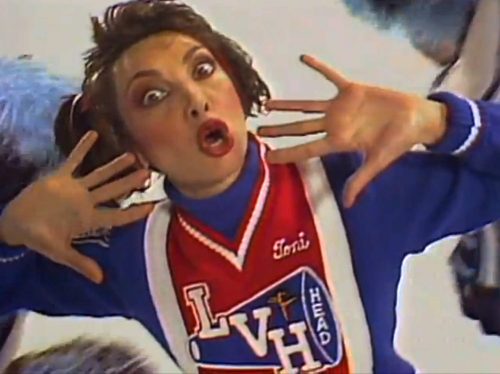 That drum beat tho.

I don’t care how cheesy and overall meaningless “Mickey” by Toni Basil is. I loved it and its catchy chorus when it hit radio in 1982 as a 11-year old, and I still get down with it today.

Being a bit more serious, the chorus is one of the most recognizable of anything I remember from the 80s, and the “Oh Mickey you’re so fine, you’re so fine you blow my mind, hey Mickey” along with the drums was/is as popular as it gets.

Music fans often call tunes a one-hit wonder but more times than not a little research proves it to be not true.  In Toni Basil’s case , “Mickey” is a legit-one hit wonder.  Forget another hit—I’m not sure Basil ever recorded another song and if she did I never heard it.

Doesn’t matter.  “Mickey” is the bomb.

Chart Success:  The song was actually released a full year ahead of it becoming a hit in the United States, but once it caught steam it rose all the way to number-one on the Billboard Top 100, where it stayed on the charts for 27 weeks. It finished the year 36th on the year-end Billboard Top 100.

Great Lyrics:  Seriously? Just sing it over and over again for the remainder of eternity.

Fun Fact: Mike Chapman and Nicky Chinn wrote this song. The combo have other 80s hits to their credit, including “Love is a Battlefield” (spoiler: you’ll be seeing that here down the road) and “Ballroom Blitz”.  The song was actually recorded as “Kitty” by an unheralded group called Racey.  Basil eventually got a hold a hold of the song and changed the title to “Mickey” so it could be about a boy—ironic because the majority of people I know named Mickey are actually female.