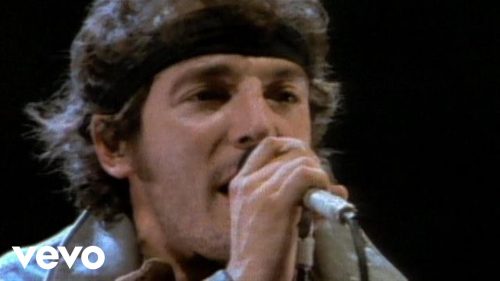 Perhaps I had a choice on how much I’d come to like “Born in the USA” but not listening was never an option. From the day Bruce Springsteen’s album came out as a 13-year old, I was subjected to hearing this song ad nauseam thanks to my father. This was one of, if not his favorite song ever.  Over time it grew on me and ultimately I’d go on to share the same zeal as my pops.

I just wish I had known then it was for all the wrong reasons.

I’m not ashamed to come clean when it comes to Born in the USA.  Like many proud Americans young and old, I thought it was a song that confirmed unrivaled patriotism. I know I’m not alone. I recall innumerable commercials and visuals of people blasting this while proudly sporting their American colors.  I’m not completely positive but reasonably confident of recalling a Hulk Hogan WWF training montage to the tune. I know boxers often entered the ring to it.

Of course, I was one of many dense to the song’s real meaning  Had I paid more attention to the details of the verses instead of just falling in love with the nationalistic course I’d have known this is one of the most misinterpreted songs in American music history.

In reality, Born in the USA is a Springsteen masterpiece that speaks of American soldiers being disregarded if not completely treated like shit upon returning home from Vietnam—the first war involving American troops the United States technically didn’t win.

In an interview excerpt seen on Songfacts.com, Springsteen said “In my songs, the spiritual part, the hope part is in the choruses. The blues, and your daily realities are in the details of the verses. The spiritual comes out in the choruses, which I got from Gospel music and the church.”

As I got older and gained a better grasp on the song’s consequence, I loved it even more. The majority of 80s music that stayed with me was poppy cheese and a slew of slow/power ballads, but on occasion a melody like this with such deep connotation would rise to the forefront of what I regard as great 80s music.

Great Lyrics: How the hell did I not know?

“Come back home to the refinery
Hiring man said “son if it was up to me”
Went down to see my V.A. man
He said “son, don’t you understand”

I had a brother at Khe Sahn
Fighting off the Viet Cong
They’re still there, he’s all gone

Fun Facts: Wanna hear some crazy shit? Springsteen has never had a Billboard number-one hit.  He came close, as Dancing in the Dark peaked at number-two but he never had a song reach the top spot.  He does have a dozen Top 10 hits.