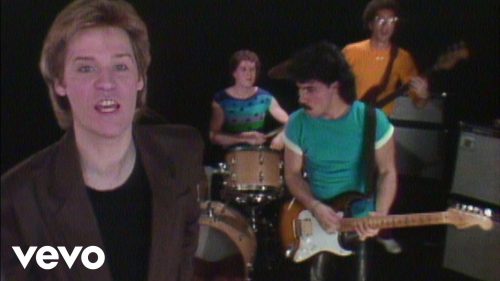 It’s entirely possible Hall & Oates may be my favorite pop group of the 80s era, although Huey Lewis & The News may have something to say about that.  A significant part of the pop music fabric, Hall and Oates’ music was many things to me growing up, and the simple word “fun” resides at the top.

Never is that more on display than with “You Make My Dreams” from their Voices album in the very early 1980s.

For me, it’s one of the catchiest the group has ever written.  From the opening measure and pretty much throughout I find myself involuntarily snapping my fingers and singing along. I mean, how can you not? It’s literally impossible to stay still for the duration of this tune. 10-years young at the time it became a hit, I probably wore out my bedroom floor dancing around to it.

If you really think about it, the brilliance of Hall & Oates during the 80s was their unrivaled ability to offer a little something to any fan of pop music.  Whether your preferred genre was dance, soul, new wave or even hard rock it mattered not—everyone universally liked the duo.

It’s also undeniably one of the best movie montage songs of all-time.  Go back and watch “The Wedding Singer”, “Step Brothers” and “500 Days of Summer”.  Hollywood isn’t stupid—they know we all need some Hall & Oates in our lives.

Fun Fact: Many casual fans only know Hall & Oates from the 80s and while they were huge during that time, they were in fact established long before.  “Voices” was released in 1980 and at the time it was already their ninth studio album.  They had eight previous Top 40 hits before this gem.