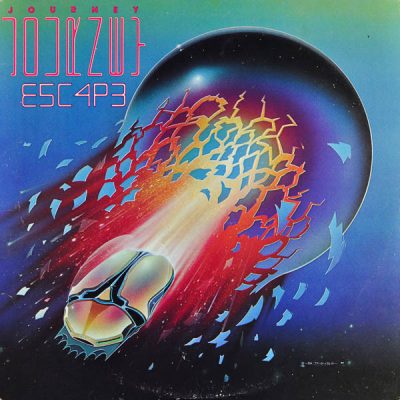 Why I Loved It: This is flat-out one of the best rock albums of the 80’s, if not all-time.  Thanks to the Sopranos if you’re under 30 it’s almost automatic “Don’t Stop Believing” is the first thing you think of when identifying Journey.  Don’t get me wrong—I like the song as well, far before it became immortalized forever by younger generations on the HBO show finale in 2007 —  It was No. 89 on my Favorite 100 Songs of the 80s countdown last year. I guess I’m just a little bitter at bandwagon jumpers over the tune.  This shit was my jam when I was 10 years old…it shouldn’t have taken y’all 26 years to climb on board. Plus, it’s now officially one of the most overplayed songs of all-time. “Open Arms” (No. 57 on my countdown last year) is my favorite song from this album and one of the first and best power ballads of all-time. In fact, according to VH-1 it’s literally the top-ranked power ballad of all-time. Ironically it only became a Journey smash shit because John Waite (of “Missing You” fame) turned down doing the song. “Who’s Crying Now” and “Still They Ride” are excellent tunes that fly under the radar because of the success of their bigger hits. I pride myself in being able to muster a handful of paragraphs describing each album I have on this countdown but in this case I must recite a line from the All Music review site because they lay out Escape perfectly, saying “The songs are timeless, and as a whole, they have a way of rekindling the innocence of youthful romance and the rebelliousness of growing up, built from heartfelt songwriting and sturdy musicianship.”

Commercial Success:  Although it was just one year into the decade this was already Journey’s seventh studio album. Escape was their biggest studio commercial success, skyrocketing to number-one on the Billboard Top 200, although it would last just one top before Tattoo You by the Rolling Stones took over and spent nine (!) consecutive weeks at the top. No singles from Escape reached the top of the charts but it did land three in the top 10 and four overall, led by “Open Arms”, which rose to number-two on the Billboard Hot 100 (No. 34 on the year-end chart.)  “Who’s Crying Now” peaked at number-four on the same chart while “Don’t Stop Believing” surprisingly only reached nine.  “Still They Ride” rounded out the Billboard hits by reaching No. 19.  “Who’s Crying Now” didn’t register on the Billboard Hot 100 but was a jukebox favorite and landed at No. 46 on the UK Singles Chart. “Stone In Love” was No. 13 on the Mainstream Rock charts.  In total Escape sold more than nine million copies in the United States.

Fun Facts: From Songfacts.com regarding their song “Who’s Crying Now”:  “This was one of the first Journey songs to feature keyboardist/guitarist Jonathan Cain. He had been a member of the Babys before replacing longtime keyboardist Gregg Rolie in Journey. He wrote the song with lead singer Steve Perry. According to the liner notes of Journey’s Time3 compilation, Steve Perry wrote the chorus of the song driving from Bakersfield to San Francisco, singing into a cassette recorder. He went to Cain’s house, rain pouring down in sheets outside, with the whole song in his head. He hummed the song to Cain and guided him through the piano part. Cain suggested the tune sounded like “A somebody done somebody wrong song” and came up with the line, “Who’s crying now?” They finished the song that afternoon. Escape was Journey’s only #1 album.”