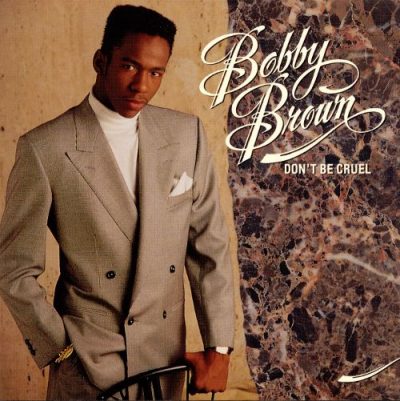 Why I Loved It: With this album, Brown permanently ridded himself of the candy-pop/bubblegum perception that followed him around as a key member of New Edition in the early-to-mid 80’s. By the late 1980’s the new jack swing style of music was in full effect—a blend of traditional R&B with hip hop, and Brown became a pioneer of the genre, at least in regards to making it popular commercially.  Never was that new jack style more apparent than on his album title-track single, “Don’t Be Cruel.”  Written by LA Reid and Babyface because of course it was, Brown along with Daryl Simmons wrote the rap portion of the song, which by the way came in at No. 68 on my Favorite 100 Songs of the 80’s countdown last year.

One of my favorite things about this album is unlike many classics from the 80’s that were amazing but didn’t age well, most of Brown’s tracks here doesn’t sound dated, meaning they feel every bit as relevant today as they did nearly 30 years ago.

I’ve always been partial to the slow ballads and Brown had two absolutely gems on this album with “Roni” and “Rock Wit’cha.” This was one of those collections of songs where it didn’t matter your race, gender or hell, even overall musical preference— everyone got down to this classic album.

Commercial Success:  Brown’s second solo studio album was far and away his most successful, putting the former New Edition star at the peak of his career. It was released and first hit the charts in the summer of 1988 and a full six months later climbed all the way to number-one on the Billboard Top 200. It remained on top of the charts for six weeks but not consecutively, as Guns N’ Roses replaced them for one week after Brown’s four consecutive week run at the top.  Not only did Brown hit the top of the charts, the album finished 1989 ranked number-one on the year-end Billboard chart. Five songs were released as singles and all five reached the Billboard top 10, including the lone number-one on the Billboard Hot 100, “My Prerogative”, which finished ’89 second on the year-end chart as well.  “Every Little Step” and “Roni” both peaked at number-three on the Billboard Hot 100, while “Rock Wit’cha” reached seven and “Don’t Be Cruel” maxed out at eight.  All five songs peaked on the top three of the U.S. R&B charts, with “My Prerogative”, “Every Little Step” and “Don’t Be Cruel” all hitting number-one. In total the album has sold more than seven million copies in the United States and Brown won a Grammy for Best Male R&B Vocal Performance on “Every Little Step.”

Fun Facts: From Songfacts.com: “When his second album, Don’t Be Cruel, hit #1 US in 1989, Brown was just a few weeks shy of his 20th birthday. This made him just the fourth teenager to have a #1 album in America, following Ricky Nelson, Stevie Wonder and Tiffany. Debbie Gibson became the fifth when her album Electric Youth hit #1, replacing Don’t Be Cruel at the top spot. Soon after his 1988 album Don’t Be Cruel was released, he went on tour with Al B. Sure! and New Edition on New Edition’s Heart Break tour. When the tour started, he was the opening act and given about 10 minutes to perform. By the end of the tour, his album was taking off and many in audience were there to see him. He ascended to second on the bill and his set was extended to 45 minutes. After this tour, he set out on his own just weeks later, filling the same venues as a headliner.”