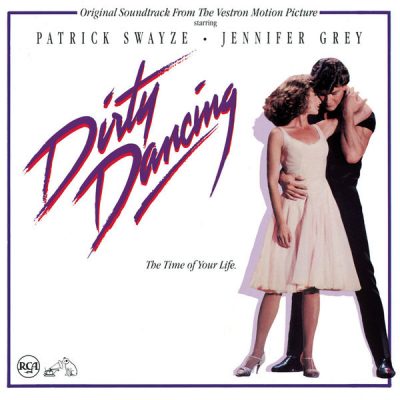 Why I Loved It: Is there a song ever made more closely associated with a movie than “I’ve Had The Time Of My Life” — a  tune linked with Dirty Dancing for all of eternity?

You’ll be hard pressed to recall few moments that better symbolize the marriage between 80’s music and movies than Patrick Swayze and Jennifer Grey grinding on each other during the flick’s iconic ending dance scenes.

I’m not particularly proud to admit this today (who am I kidding –yeah I am) but I walked around singing ‘She’s Like The Wind” as a 16-year old to myself each time a young dame broke my heart, which sadly was more than once. Maybe that’s why it came in at No. 62 on my Favorite 100 Songs of the 80’s countdown earlier this year. Dirty Dancing pieced together a soundtrack that felt good to hear with each track landing seamlessly with the movie,  but beyond that contained three songs that could’ve easily been hits even if not included on the soundtrack.

Commercial Success: One of the best-selling albums of 1987? The 80’s in general? Come again, pal.  This soundtrack is one of the best-selling albums of all-time.  The Dirty Dancing Soundtrack has sold more than 11 million copies in the United States alone and nearly 18 million worldwide, reportedly tied for the 13th most ever. It’s no wonder the album spent a staggering 18 weeks at number-one on the Billboard Hot 100. “(I’ve Had) The Time of My Life” by Bill Medley and Jennifer Warnes led the way, parking itself at number-one on the Billboard Hot 100 and going on to win both a Grammy and Golden Globe for Best Original Song as well as a Grammy for Best Pop Performance by a Duo or Group with Vocals.  Patrick Swayze’s “She’s Like the Wind” peaked at number-three on the Billboard Hot 100 and finished 40th on the 1988 year-end Billboard Hot 100. “Hungry Eyes” by Eric Carmen got up to four on the Billboard Hot 100 and finished ’88 ranked 25th on the year-end chart. Of course, this album had several non-original songs on that were hits long before, including “Be My Baby” by the Ronettes and “In The Still of the Night” by the Five Satins.

Fun Facts: Val Kilmer was originally offered the lead part but turned it down, opening the door for Patrick Swayze.  Dumb move, Val.  It’s also been reported that Billy Zane was considered for the role but got passed on because he wasn’t a good dancer.  Swayze was cast as a 24-year old in the movie although he was actually 34 and likewise for Jennifer Gray, who played a 16-year old despite being 26.

One last Swayze fun fact: “She’s Like The Wind” was originally written for a 1984 film called Grandview, U.S.A., but when it wasn’t used the song ended up on Dirty Dancing.