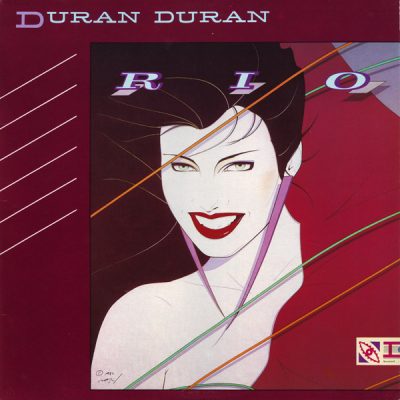 WHY I LOVED IT:   Duran Duran became huge during in the infancy of the MTV video era, in no small part due to their good looks which made the group teen pop magazine pinup royalty. The album would never be mistaken for Lennon, Dylan or Hendrix, but Duran Duran’s “Rio” was perfectly emblematic of their perception.  None of the tracks are necessarily overflowed in substance, but they’re showy, entertaining and largely accommodating of mainstream America.

What I remember most fondly about “Rio” is that it felt as symbolic of the 80’s as the 80s could get. I implore you to find a more Identifiable track at any 80’s party than “Hungry Like The Wolf” Everybody knows that song.

Shit, people who’ve never heard it probably still somehow know it. You should also know earlier this year it came in at No. 59 on the Moran-Alytics Favorite 100 Songs of the 80s countdown.   “New Religion” was an underrated song few people talk about.  This was a very good 80’s album.

COMMERCIAL SUCCESS:  “Rio” was the 1982 sophomore effort following their self-titled debut album the year before and enjoyed reasonably well commercial success.  “Rio” reached six on the Billboard Top 200 in the United States while charting higher in Australia (one) and the U.K. (two).  Most impressively is the album stayed on the charts for more than two years.  It was anchored by “Hungry Like The Wolf”, which hit the top of the Billboard Top Rock tracks and number-three overall on the Billboard Hot 100—finishing 17th on the 1983 year-end Billboard Hot 100.  “Rio” (the single) peaked at No. 14 on the Billboard Hot 100 while “Save a Prayer” maxed out at 16.

FUN FACTS:  Per Mentalfloss.com, Duran Duran was censored in the 80’s and 90’s and banned by the BBC.  The article states “While they were the darlings of MTV back in the day, Duran Duran actually found themselves nearly banned from the network in 1997 because of their risqué video for “Electric Barbarella,” which had to be edited due to its racy content. The video, which features Simon Le Bon, Nick Rhodes, and Warren Cuccurullo purchasing and programming a sexy female robot (a scenario reminiscent of the movie Cherry 2000), was banned from the BBC and pulled from MuchMusic in Canada. While not quite the hypersexual clip that “Girls On Film” had been back in 1981 (which was banned on MTV and the BBC at the time), it still generated some controversy for the band at a quieter point in their career. Incidentally, their name comes from the moniker of the villain in the Jane Fonda movie Barbarella, to which the 1997 video is a nod. The song, in turn, inspired the name of the ill-fated MTV reality show girl band, the Electric Barbarellas.”