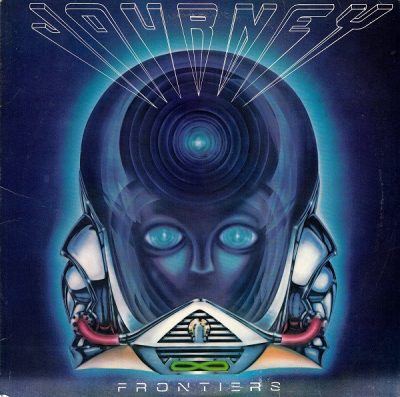 NOTABLE TRACKS: “Separate Ways”, “Faithfully”, “After The Fall”, “Send Her My Love”

WHY I LOVED IT: Frontiers almost identically shadows the same blueprint as their previous albums two years prior, Escape, packed with ballads built for radio along with a couple of rock out with your cock out jams, with literally every track ultimately designed to accentuate Steve Perry’s distinctively stunning vocals. In the interest of full disclosure I actually liked the Escape album more, which I suppose is a future spoiler alert here, but this album was fantastic as well.  The album’s signature slow jam “Faithfully” is the ballad follow-up to “Open Arms” and Perry’s beguiling riffs keep you engrossed, whether it’s voluntarily or not.

One of my favorite things about “Faithfully”, actually is it inspired me to go back and find many of Journey’s previous less- hyped albums from the late 70’s I’d come to find insanely underrated.

COMMERCIAL SUCCESS: By the time “Frontiers” dropped it was already the band’s eighth studio album. It ended up being one of their most successful—selling more than six million copies in the United States alone. The album would reach number-two on the Billboard Top 200 and sprung four charting singles.  The biggest was “Separate Ways”, which peaked at eight on the Billboard Hot 100 and reached the top of the Mainstream Rock chart.  “Faithfully” hit No. 12 on the Billboard Hot 100 while “After the Fall” and Send Her My Love” managed to reach as high as No. 23.  “Frontier” is the band’s all-time biggest selling album in the U.K.

FUN FACTS:  From Songfacts.com comes a couple of interesting nuggets. “When the group formed, they held a contest on the San Francisco radio station KSAN-FM to come up with the name of the band, the winner getting tickets for life to their shows. The names terrible – stuff like Rumpled Foreskin and The Mound Pounders. John Villanueva, who worked in the band’s management, came up with the name Journey, and they created a fake winner for the contest, an imaginary listener named Toby Pratt.”

Also, from AXS.com: “In 1986 the group parted ways with their bassist Ross Valory. To replace him in the band they went with a studio bassist named Randy Jackson. After recording their “Raised on Radio” album Randy Jackson spent that year touring with the band. Mr. Jackson since went on to put together an impressive career and become one of the original judges on “American Idol”.