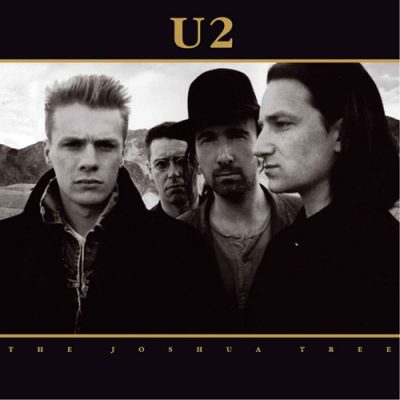 Notable Songs: “With Or Without You”, “Where The Streets Have No Name”, “I Still Haven’t Found What I’m Looking For”, “In God’s Country”, One Tree Hill”

Album MVP: “Where The Streets Have No Name”

Why I Loved It: I’m probably going to get killed for this placement by rabid U2 fans, who in fairness have an excellent case to call me a clown for having this historic album so perceived low on my countdown. I’m not going to deny the brilliance of U2 or the significant musical and cultural impact the group had on society, more/less starting with this album. I’d be a fool to even try.  My lone problem with The Joshua Tree is I simply didn’t love the album that much. I didn’t hate it. I didn’t dislike it. Hell, I liked it. I just didn’t like it as much as many others did. Sue me or something… I don’t know what else to tell you.

Now that I got that out the way—- If not one of the best true rock albums of the decade The Joshua Tree was unarguably one of the most influential. Whether it’s Coldplay, Radiohead, Arcade Fire or endless others, hoards of ensuing rock groups were profoundly influenced by this album.

The songwriting is masterful and the run of mid-tempo rock songs will be remembered forever.  As for the singles, it didn’t get the same hype as their pair of mega number-one hits but for my money “Where The Streets Have No Name” is my personal favorite on the album. Generally speaking if there’s one thing about U2 that’s turned me is off is  sometimes finding myself  annoyed that their music feels a touch too self-important, as their aspirations of constantly creating tunes so heavily anthem-like and emotional driven wears on me a little. I mean, crack a fuckin’ smile or something, Bono. I feel sorry for my Twitter mentions after that commentary.  Again, I really liked this album but not enough to put it near the top of a countdown with my name attached to it.

Commercial Success: Their fifth studio album, the sound for The Joshua Tree was harder, as was its impact on the musical charts. To date it’s the bands best-selling album ever, having sold more than 25 million copies worldwide. It reached the top of the Billboard Top 200 and finished 1987 ranked sixth on the year-end Billboard album charts. Of course, the album spawned a pair of number-one singles, as both “With or Without You” and “I Still Haven’t Found What I’m Looking For” both reached the top of the Billboard Hot 100, with the former holding the top spot for three consecutive weeks and the former hanging on for two. “Where The Streets Have No Name” was the third song to top the charts in Ireland but had to settle for No. 13 in the United States. “In God’s Country” got up to No. 44 before stalling out.  Aside from album sales and charts U2 dominate the 1988 awards circuit, capturing a Grammy for Album of the Year and Best Rock Performance by a Duo or Group with Vocals.

Fun Facts: This passage comes from Rolling Stone Magazine, which tells the story of “I Still Haven’t Found What I’m Looking For” originally being a different kind of song.

“The DNA of one of U2’s most enduring anthems can be found in a demo from an early jam session, alternately titled “The Weather Girls” or “Under the Weather.” It was, according to Clayton, “a bit of a one-note groove,” while the Edge dismissed it as “a little like ‘Eye of the Tiger’ played by a reggae band.” The song’s only saving grace was Mullen’s unusual drum part. “It was a very original beat from Larry,” Lanois told Hot Press. “We always look for those beats that would qualify as a signature for the song. And that certainly was one of those. It had this tom-tom thing that he does and nobody ever understands.”

Keeping the drum track as a base, the band layered new instrumental tracks overtop to fit the rhythm. “It was like building a building. Foundation, next, then you put in furniture in the end. I enjoyed that process,” says Lanois in the Classic Albums documentary. As the new melody began to take shape, it bore traces of gospel – a relatively unexplored genre for the band. “I always loved gospel music and I encouraged Bono to take it to that place, which he did,” Lanois continues. “It was a very non-U2 thing to do at the time, to go up the street of gospel, but it opened a bit of a door for them.”

With the instrumental backing nearly complete, Bono entered the live room to experiment with a vocal melody through largely improvised lyrics. For the Edge, his bandmate’s performance evoked a phrase he had conjured up that morning, loosely inspired by the lyrics to Bob Dylan’s “Idiot Wind” (“You’ll find out when you reach the top you’re on the bottom”).

“As I listened to this incredible song emerging out of the fog, I remembered something I had written in a notebook, a possible song title that I had actually stumbled upon that morning,” the Edge says in U2 by U2. “I tried it in my head as Bono sang, and it scanned so perfectly that I wrote it on a piece of paper and handed it to him as he sang. It was like a hand in glove.”