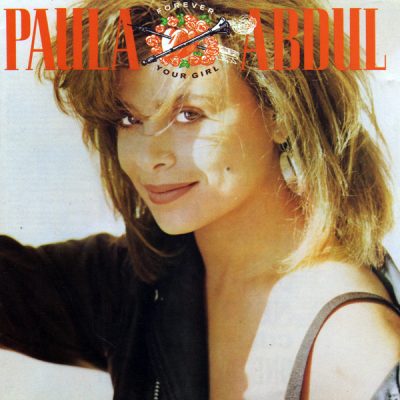 Notable Songs: “Knocked Out”, “The Way That You Love Me”, “Straight Up”, “Forever Your Girl”, “Cold Hearted”, “Opposites Attract”

Why I Loved It:  A younger generation will mostly remember Abdul as the quirky and quite possibly occasionally comatose judge alongside Simon Cowell and Randy Jackson on American Idol. It’s a shame, because Abdul was an incredibly talented choreographer and performer, and this debut album is one of the late 80s best efforts and certainly most successful. This album had 10 singles and five of them were Billboard top three hits, including four number-ones.  Are you freegin’ kidding me?  Is this one of the decade’s most critically acclaimed albums?  Is it part of the quintessential 80’s collection to leave behind for the most ardent lovers of music? Of course it’s not.

It’s exactly what it’s supposed to be –very light pop with fun beats, cool music videos and catchy hooks that have you singing along whether you mean to or not.

Sure, Forever Your Girl is an assortment of what may be the cheesiest music of the latter half of this glorious decade but whatever, dudes— it consistently brings back fun memories from my youth. That and it’s resounding commercial success merits having it on this countdown.

Commercial Success: Looking for a little commercial success?  Well, how about at the time having the most commercially successful debut album in the history of the Billboard charts—does that hold your attention?  Forever Your Girl was the first time a singer held the top spot on the Billboard Hot 100 with four singles on a debut studio album. “Straight Up” hit number-one and spent three weeks on top of the Billboard Hot 100, also finishing 1989 fourth on the year-end chart. “Forever Your Girl” spent two weeks at number-one while “Cold Hearted” hit number-one and finished ’89 ranked sixth on the year-end chart, giving Abdul two of the top six songs of 1989.  Her sixth and final single, “Opposites Attract” became her fourth number-one and stayed there for three weeks.   “The Way That You Love Me” had to settle for peaking at number-three on the Billboard Hot 100.  In total, Forever Your Girl sold more than seven million copies in the United States.  This album also propelled Abdul to winning four MTV Awards (nominated for six) and two American Music Awards (nominated for five).

Fun Facts:  From Songfacts.com on “Opposites Attract”, her record-setting fourth number-one single off the album.  “This was written by Oliver Leiber, who is the son of legendary songwriter Jerry Leiber of Leiber and Stoller fame. Oliver Leiber had already written “Forever Your Girl” and “(It’s Just) The Way That You Love Me” for Paula when he got a frantic call from Gemma Corfield, who was the A&R head at Virgin Records. She needed one more song to complete the album. Oliver told us: “My MPC60 had just shown up a day before, and that was supposed to be the new improved version of the Linn 9000. It was a brand new sequencer drum machine. I had programmed a two-bar groove bassline and drum part to learn the MPC60, nothing more. It was just like, Okay, let’s program and, as we all do with new pieces of gear, sort of find your way around. So I had this groove sitting there, I could press play, and I had a bunch of titles that I had written down, because my car had broken down near a second-hand cheesy bookstore, and I had like four hours to kill. It was all just drug store novels, and I wrote down all these titles, because they were incredibly dramatic. It was like ‘A Bloody Moon,’ or ‘Midnight Mistress,’ just really over the top. I had this list in front of me, and I had Gemma on the phone, I had the two-bar groove right there, and I winged it, to be very honest. One of the titles jumped out at me, and it was ‘Opposites Attract.’ I was like, ‘You know, I’ve got this idea and it’s ‘Opposites Attract,’ and here’s the groove,’ and I was pretty much tap dancing. But I played her the groove and I spun an idea that maybe it could be a duet, and here’s the melody over it. She was like, ‘Okay, that sounds great! I love it! How fast can you do it?’ Honestly, I probably could have said anything at that point, although in retrospect, when a record sells 15 million copies everybody comes out and tells how they A&R’d everything, but this was not a whole lot of A&Ring going on, to be quite honest. So I got the green light.”