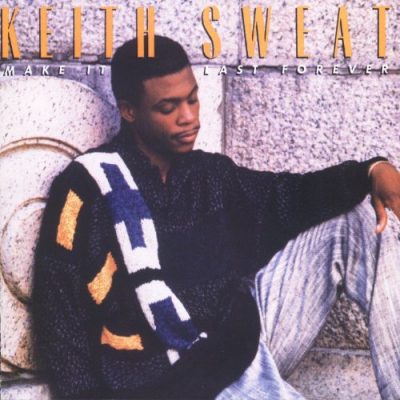 WHY I LOVED IT: For starters, the title track “Make It Last Forever” was the theme of my senior prom in ’89; which brings back both warmhearted memories while subsequently serving as a reminder of how old I’m getting. While I fancy myself as an appreciator of all genres of music, my soft spot has always been for R&B. Babyface was the premiere male solo R&B artist of the 90s and for my money it was Sweat in the 80s.  “I Want Her” was his big commercial hit from this album but there’s no less than four amazing songs on it, including slow jams diamonds in the rough like “In The Rain” and “How Deep Is Your Love” younger R&B fans would probably love if they knew of them. Well now you do. This was a criminally underrated effort from Sweat.

COMMERCIAL SUCCESS:  “Make It Last Forever” reached the top of the Billboard Albums chart in 1987 and stayed there for three weeks before being knocked off by Michael Jackson’s “Bad”.  The album maxed out at No. 15 on the overall Billboard Top 200.  “I Want Her” reached number-five on the Billboard Hot 100 singles while “Make It Last Forever” made it to No. 59.  The songs were one and two, respectively on the Hot R&B songs chart at various points of 1987-88.

FUN FACT:  “Make It Last Forever” was Sweat’s most successful album, selling more than three million copies.  Sweat is credited as being one of the pioneers of the New Jack Swing music movement in the 80s & 90’s. He’s been around since beginning his career in 1975 with a band called Jamilah.  He’s had eight Top 40 hits in this career. If you’re young go listen to all his music! #TheMoreYouKnow