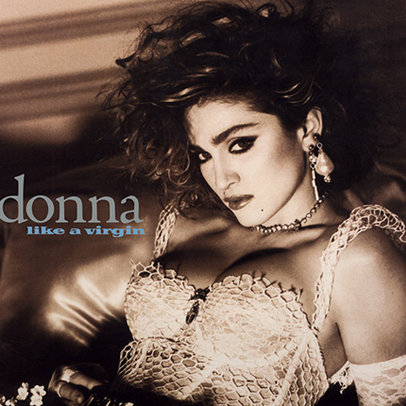 Why I Loved It: That album cover though… Madonna was so hot I would’ve bought Like A Virgin for that cover alone, even if the music was one huge pile of shit. I, like almost any teenage boy fantasized about being with Madonna in the mid-80s. Girls wanted to be here too, as I can’t count how many “boy toy” belt buckles I saw chicks sporting during those days. Having said all that, my 80s love for Madonna went far beyond her gorgeous looks and attitude. I actually loved her music on this album.  I mean, obviously it was geared towards girls but whatever, these songs were fun as hell to sing along with, albeit for teen boys like me usually best served doing so alone.

Perhaps no female in the history of the pop music business better understood the appeal of dance-pop to the younger demographic masses. Madonna had a couple hit singles on her first album but this is the one that made Madonna into a superstar. Like a Virgin was the perfect blend of bravura and defiance sprinkled in with creative foresight.

Madonna was put on this earth to be a star and she knew exactly what it was going to take to get there. “Like a Virgin” (the single) was No. 26 on my Favorite 100 Songs of the 80’s countdown last year. Again, loving many of these tracks was a (very) guilty pleasure back in the day, but I’ll never forget how much I loved this album.

Commercial Success:  Like a Virgin was one of more commercially successful female solo albums of all-time and the biggest of her career.  It went to number-one on the Billboard Top 200 and stayed on top for three weeks before being supplanted by Wham. It would finish 1984 third on the year-end Billboard chart and 52nd in 1985.  It went on to sell more than 10 million copies in the United States and 21 million worldwide. “Like a Virgin” (the single) became Madonna’s first number-one single on the Billboard Hot 100, the first of what would become 11 number-one singles.  The track stayed on top for six consecutive weeks and finished ’85 second on the year-end chart. “Material Girl” reached number two and would also become one of Madonna’s many nicknames. Both “Angel” and “Dress You Up” peaked at five on the Billboard Hot 100, giving her four hits in the top five. It would’ve been five, as “Into the Groove” reached number-one on the U.S. Dance Club Songs but was ineligible for the Billboard Hot 100 because it was only a “B” side single. This is the third Madonna album on this countdown: Like a Prayer came in at No. 65 and her self-titled debut album was No. 31.

Fun Facts: From Songfacts.com on her hit song “Material Girl”: “In a 2009 interview with Rolling Stone, Madonna was asked about her first impressions hearing the demos for this song and “Like A Virgin.” She replied: “I liked them both because they were ironic and provocative at the same time but also unlike me. I’m not a materialistic person, and I certainly wasn’t a virgin.” Expanding on her “not materialistic” statement, she said, “I feel lucky to be able to afford a Frida Kahlo painting or live in a nice house, but I know that I can live without it. I’m resourceful, and if I ended up in a log cabin in the middle of the forest, that would work too. These things are not mandatory for my happiness.”The video shoot for this song was where Madonna first met her future husband, Sean Penn. The connection was Meegan Lee Ochs, who was working on the shoot and had been Penn’s assistant (she’s also the daughter of the late folk singer Phil Ochs). Penn came by the shoot and got his first look at Madonna when she was in full costume.”