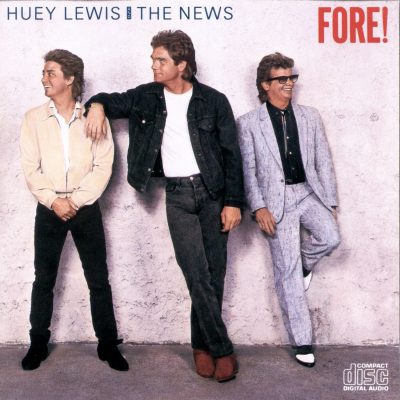 Album MVP: “Stuck With You”

Why I Loved It: In my opinion Sports established Huey Lewis And The News as the poster child for 80’s pop music. Three years later Fore! cemented it. Honestly, I don’t think there’s a single bad song to be found on this album. I very fondly remembering as a teenager in this 80’s seeing the group grow into their own from both a commercial and artistic standpoint. They knew exactly who they were and what they wanted to be.

If you can’t have a legit appreciation for songs like Stuck With You and Hip to Be Square, I have no idea why you’re reading this countdown or ever enjoyed 80’s pop music to begin with.

Commercial Success: Three years removed from their historically memorable Sports album, Fore! was a massive commercial success as well.  It shot all the way up to number-one on the Billboard Top 200 and went on to produce five songs landing in the Top 10.  Stuck With You was one of the album’s two number-one singles on the Billboard Hot 100, spending three weeks on top and finished 1986 ranked 21st on the year-end Billboard Hot 100.  The other was Jacob’s Ladder, which ended a four-week run at the top by Bon Jovi’s Livin’ on a Prayer in March of 1987. Hip to be Square peaked at three on the Billboard Hot 100, while Doing It All For My Baby reached as high as six and I Know What I Like maxed out at nine. In total Fore! sold more than three million albums in the United States and it finished ’86 ranked seventh on the year-end Billboard Top 200.

Fun Facts: Courtesy of Biography.com: “In an era dominated by pop icons like Prince, Madonna and Michael Jackson, Huey Lewis was a full-blown star. In 1985, The News clocked its first No. 1 single with “The Power of Love,” from the soundtrack to the movie Back to the Future, starring Michael J. Fox.

“It was over the top,” Lewis later said of the stardom. “You couldn’t go to a shopping mall, airports were a problem. Any place with a lot of people was a problem,” he says.

Even Huey Lewis–sounding songs began popping up on the airwaves. In 1984, Lewis sued Ray Parker Jr., alleging that Parker’s hit single “Ghostbusters” sounded exactly like “I Want a New Drug.” The suit was settled out of court, and Lewis has never been allowed to talk about its outcome.

While the group’s fourth studio album, Fore! (1986), offered up another string of singles, the band began to drop back from the center of the pop universe in the late 1980s. Critics blasted the 1988 release Small World, which strayed considerably from The News’ expected formula of pop love songs.”