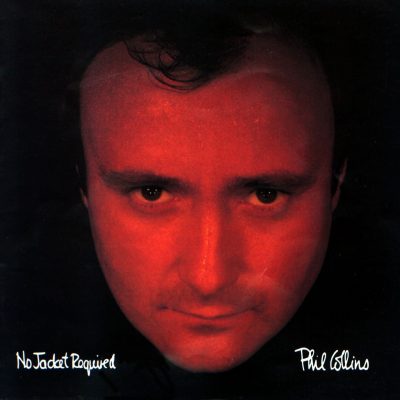 Why I Loved It: After all the hits Collins put out with Genesis followed by his Face Value and Hello, I Must Be Going albums you’d think he would’ve slowed down when it came to busting out hit singles. Wrong.  No Jacket Required not only followed his previous robust work but turned out to be the best album of his career, both commercially and critically. As a solo artist Collins possessed many gifts during this era but for me, far and away the biggest was his insane ability to write the biggest, catchiest freegin’ hooks on God’s green earth.

Til this day I probably can’t remember six words to a verse of “Sussudio” but guarantee I’ll sing that chorus over and over again in my sleep.

Ditto for “Don’t Lose My Number” and “Take Me Home.” I can’t lump “One More Night” (No. 64 on my Favorite 100 Songs of the 80s countdown last year) with simply catchy choruses, as I feel I’d be doing a tremendous disservice. While not the most manliest thing to admit I’m a complete sucker for 80’s soft ballads.  There’s few, very few that were done better than this. My man Phil’s practically begging his dream girl to give him one more night to show how much he loves her. I mean, that’s Romance 101 my friends.  Everything about this album is great, including Phil’s semi-creepy face slapped on it.  This is a classic necessity for any 80s collection.

Commercial Success:  Collins’ third studio album would be his most commercially successful. No Jacket Required rose to number-one on the Billboard Top 200 and stayed on top for six weeks, although the run wasn’t consecutive. The album was number one for four weeks before being overtaken by USA For Africa’s We Are The World, who stayed on top for two weeks before Collins reclaimed it for another two weeks. Both “One More Night” and “Sussudio” hit number-one on the Billboard Hot 100 as singles with the former staying at one for two weeks.  “Don’t Lose My Number” peaked at number-four and “Take Me Me Home” became the fourth top 10 single, reaching seven.   Collins would go on to receive five Grammy nominations for this album, winning Album of the Year and Best Pop Vocal Performance, Male.  In total No Jacket Required has sold more than 25 million copies worldwide, making it one of the top 40 selling albums of all-time.

Fun Facts: From Genesisfan.com: “The album sold over 25 million copies worldwide. For comparison sake, Taylor Swift’s “1989,” one of the biggest albums in recent memory, has sold just over five million copies. The album went 12X platinum in U.S., 6X platinum in United Kingdom, 2X platinum in France, and 10X platinum in Canada sales-wise. “One More Night” was the first single released in the U.S. It reached #1 on the Billboard Hot 100 and the Billboard Hot Adult Contemporary charts. Sting, who had just left The Police at the height of their success post-“Synchronicity” album, sang backing vocals on “Long Long Way to Go” and “Take Me Home.” “Take Me Home” featured backing vocals from Peter Gabriel, Collins’ former bandmate in Genesis.”