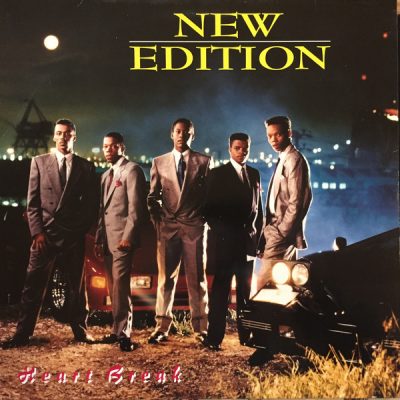 ALBUM MVP: “Can You Stand The Rain”

WHY I LOVED IT:  I first fell in love with New Edition music in 1983 with their debut album “Candy Girl” LP even more so the following year with their smash success self-titled follow up.  Things were far different by 1988.  Gone was their innocent boyish music and videos about the group hooping in the playground, Ralph Tresvant dropping rhymes at his boys to not interfere in his quest for a girl, and Bobby Brown pleading with a telephone technician that there’s something wrong with his line.  Also gone by ’88 was Brown himself, who bolted to launch a huge solo career. It was thought the group’s best days were long gone but in came Johnny Gill and a new sound was ushered in—a far more grown up vibe.  Not to be confused with legendary R&B group Boyz II Men, “Heartbreak” represented New Edition’s transformation from to just that— boys to men.  To this day “Can You Stand The Rain” is one of the best R&B slow jams I’ve ever heard, and good luck seeing me put five bucks in the jukebox and not cue up “If It Isn’t Love.”   When people think of New Edition most don’t pay Gill enough respect and it’s a shame. Gill’s addition added plenty of the fervor and romance to the group’s intimate song interpretations. It wouldn’t have worked as well without him.  This was a great album and a complete transformation for the group.

COMMERCIAL SUCCESS:  Following a pair of so-so albums after their commercial breakthrough 1984 self-titled album, “Heartbreak” enjoyed tremendous success.  It reached number-three on the Billboard R&B Albums chart and 12 on the overall Billboard Top 200 and eventually went double platinum.  From it came five charting singles, with “Can You Stand The Rain” leading the way by reaching the top of the U.S. Billboard Black Singles and “If It Isn’t Love” peaking at two on the R&B Singles Charts.

FUN FACT:  BET aired the three-part “The New Edition Story” this year, and from it we learned a lot of very interesting information, assuming of course the information was accurate. The most notable is Maurice Starr,  owner of Streetwise Record who also wrote and produced New Edition’s debut “Candy Girl” album,  originally was only interested in signing Ralph Tresvant to a solo contract.  Tresvant refused to sign and insisted Starr signed the entire group.  Essentially had it not been for Tresvant’s selflessness there wouldn’t have ever been a New Edition.