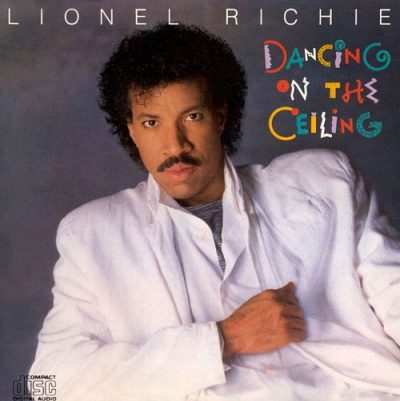 NOTABLE TRACKS: ”Say You Say Me”, “Dancing on the Ceiling”, “Love Will Conquer All”, “Ballerina Girl”, “Se La”

ALBUM MVP: “Dancing on the Ceiling”

WHY I LOVED IT: In a way I can see why this album wasn’t quite so fondly received by critics.  Admittedly it’s a bit a letdown when you compare it to his previous two efforts, his self-titled album and Can’t Slow Down.  To be fair to Richie those were two of the greatest albums of the decade (spoiler alert- you’ll be seeing both down the road) so almost anything by comparison as destined to be a comedown in quality.  With this album Richie drifted further away from his authentic R&B and soul roots and crossed over, far more over into pure pop. Some did like that, but I’m not some. I enjoyed this album for what it is. “Dancing on the Ceiling” (the single) is one of my favorite fun tracks of the 80s. I’m a grown ass man and still pump singles into the jukebox when I want to get the party started and have a good time. I’m not sure how much I actually like “Say You Say Me” but I’m positively helpless when it comes to avoiding singing it when it comes on. There’s probably no one else in the industry that was more irrepressibly ’80s than Lionel Richie.  This album wasn’t quite as good as his first two solo offerings, but I enjoyed the shit out of it nonetheless.

COMMERCIAL SUCCESS:  The album ultimately reached number-one on the Billboard Top 200, supplanting Madonna’s “True Blue” and remaining at the top for three weeks before being knocked off by Huey Lewis & The News.  It went on to sell four million copies in the United States.  Not only did “Say You Say Me” reach the top of the Billboard Hot 100 but it won an Oscar for best original song in a movie (White Nights) and also picked up a Golden Globe for Best Original Song.  “Dancing on the Ceiling” climbed up to number-two on the Billboard Hot 100, while “Ballerina Girl” reached seven and “Love Will Conquer All” peaked at nine.

FUN FACTS:  Not only did “Say You Say Me” win Richie an Oscar as his single reached number-one on the Billboard Hot 100, but it stayed there for four weeks. It finished 1986 as the second-biggest single on Billboard year-end Hot 100, losing out only to the for-charity single “That’s What Friends Are For” by Dionne Warrick and Friends.  Also on his album was a single not discussed much, but “Se La” reached No. 20 on billboard and is Richie’s last top 20 United States hit to date.