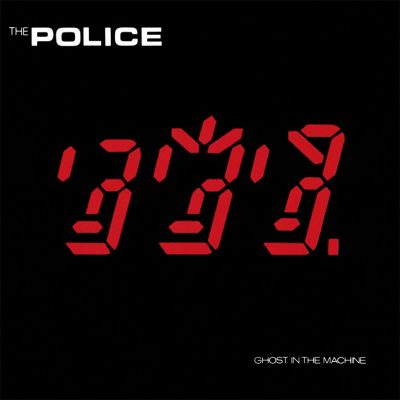 Notable Songs: “Invisible Sun”, “Every Little Thing She Does Is Magic”, “Spirits in the Material World”, “Secret Journey”

Album MVP: “Every Little Thing She Does is Magic”

Why I Loved It: There’s a handful of albums on this countdown in which their position will be questioned more than others, and this is one of them. I’m apparently far higher on Ghost in the Machine than most, because people I spoke to didn’t really care for the Police’s fourth studio effort with the same enthusiasm I did.  The Police were one of the first bands I remember that made rock music sound cool to me, as I was just 10 years old when this album was released. Prior to this The Police were more of a reggae-rock band and I’m sure they lost a portion of fans who considered this album’s more pop-friendly tracks as sellout music. However, they gained far many more than they lost, including this guy.  The Police embodied 80’s pop and the result was a phenomenal album, led by one of the more catchier song choruses of the 80’s, “Every Little Thing She Does is Magic” as well the song that got me started on the air drums, “Spirits in the Material World.”

This album unofficially began the rise of Sting as one of the most famous and socially-conscious musicians in the world.

Commercial Success: Ghost in the Machine didn’t quite enjoy the commercial success as many of the albums slotted around this part of the countdown but still did very well for itself.  The album, the group’s fourth peaked number-two on the Billboard Top 200 and hit the top spot in the United Kingdom.  Three well charting singles came from this effort: “Every Little Thing She Does is Magic” hit number-three on the Billboard Hot 100 and reached number-one on the Mainstream Rock chart. “Spirits in the Material World” found itself as high as seventh on the Mainstream Rock chart and 11th on the Billboard Hot 100.  “Secret Journey” reached No. 46 on the Billboard Hot 100 and while “Invisible Sun” didn’t chart in America it did reach number-two in the U.K. The album went on to finish 1982 tenth on the year-end Billboard Top 200 and sold more than three million copies in the United States.

Fun Facts: From Songfacts.com regarding this hit single “Spirits in the Material World.”

“This song is based on the writings of Hungarian author and philosopher Arthur Koestler. Sting enjoyed Koestler’s work, and the album Ghost In The Machine is named after one of his books. Koestler believed that outside influences could destroy our spirit and restrict our thinking. The “spirits” and “ghosts” Koestler wrote about were the innate higher functions that often get lost in the “machine” created by governments and corporations.

The word “material” has a double meaning here. In one sense, it indicates the physical world as opposed to the spiritual realm. It could also mean materialism, where a high value is placed on money and things at the expense of enlightenment.

Like many Police songs, this has a Reggae beat, although it is more synthesizer-driven than many of the others.”