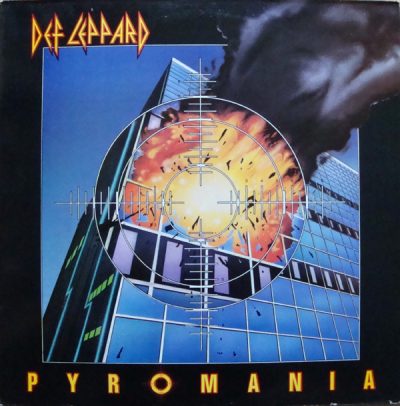 Why I Loved It: First and foremost when I recall this album I instantly think of its unforgettable cover. I was only around 12 years old when Pyromania came out and I vividly remember going with my parents to a neighborhood carnival that summer. My father had a borderline obsession and in hindsight a tacky one of collecting rock music mirrors by hitting a balloon with a dart at one of the carnival games, to hang on the dining room wall.  My father was an oldies fan (by that I mean music from the 50’s and 60s—by now I suppose 80’s music is oldies too) but despite probably not knowing two Def Leppard songs, he insatiably wanted their mirror. That’s because it was a mirror of their Pyromania album cover, which was simply that fuckin’ cool.   As for the actual music accompanying it I was a fan and remember Def Leppard as one of my first favorite rock bands. “Photograph” and “Rock of Ages” were the shit.

Along with ultra-heavy guitar riffs most the singles on Pyromania are propelled by catchy hooks that made them bar jukebox legends. Nothing about this album would be mistaken for original, but the group did rock music better than most and Pyromania was its crowning achievement.

By the way this is Def Leppard’s second (of two) appearances on this countdown. They also came in at No. 90 with Hysteria.

Fun Facts: From the never ceasing to amaze Songfacts.com regarding their hit single “Photograph”

“The Pyromania album was produced by Mutt Lange, who came up with the line, “All I’ve got is a photograph.” This gave them the idea to write a song about a guy who’s crazy about a girl, but all he has of her is a photograph. Lange, whose first work with the band was producing their previous album High ‘n’ Dry, was so integral to the band’s sound that he got songwriter credits on every Pyromania track.

he band would sometimes dedicate this song to Marilyn Monroe when they performed it live, and the video featured a Monroe look-a-like. This drew many listeners to the conclusion that the song is about the actress, but the Monroe association was constructed for the sake of a good story. The band didn’t have a specific inspiration for the lyrics, but wanted to express their young lust in an anthemic song – what guy hasn’t found himself so infatuated with a girl that every photograph he sees reminds him of her?