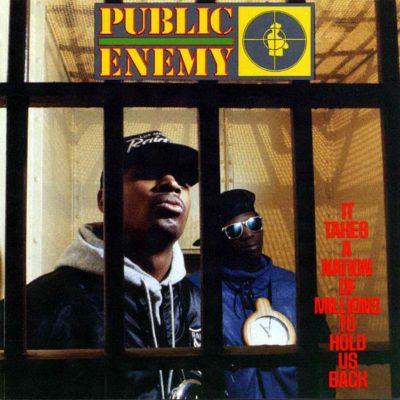 Notable Songs: “Rebel Without a Pause”, “Bring The Noise”, “Don’t Believe The Hype”, “Night of the Living Baseheads”, “Black Steel in the Hour of Chaos”

Album MVP: “Black Steel in the Hour of Choas”

Why I Loved It: If Public Enemy’s It Takes a Nation of Millions to Hold Us Back isn’t one of the era’s greatest hip-hop album overall, it’s certainly one of, if not the most meaningful. For me, everything about this album is next level shit to me and unlike anything I’d ever heard before—hell, maybe since either. Chuck D just came through on literally every track with brooding inciting lyrics, often dispensed with vehement dander. On the real, til this day “Black Steel in the Hour of Chaos” is one of the hardest rap songs I’ve ever heard in my life….my life!

It’s a good thing Donald Trump isn’t privy to “Don’t Believe The Hype”, because he’d be cranking out Public Enemy “False Media we don’t need it do we” inspired tweets.

Public Enemy was/is a rap group that grasped that the music media signifying what was good didn’t matter because their true credibility came from the people listening in the streets. This album was f’n incredible!

Commercial Success: It Takes a Nation of Millions to Hold Us Back was made with far more emphasis on the artistic side than commercial, but it did have some success among the mainstream as well in eventually reaching certified platinum status. It made it to the top of the United States Top Black Albums and made it to No. 42 on the Billboard Top 200, where it stayed on the charts for nearly one full year, 49 weeks to be exact.  “Don’t Believe the Hype” peaked at No. 18 on the Billboard Hot R&B/Hip Hop tracks while “Bring the Noise” reached No. 56 and “Night of the Living Baseheads” got up to No. 62.  “Black Steel in the Hour of Chaos” rounded up the charted singles, appearing at No. 86.

Fun Facts: From Wiki: In 2003, the album was ranked number 48 on Rolling Stone magazine’s list of the 500 greatest albums of all time, the highest ranking of all the hip hop albums on the list, and the only one acknowledged in the top hundred. Music from the album has been sampled by various artists over the years, including (though not limited to) the Beastie Boys (“Egg Man”),[70] Game (“Remedy”),[71] Jay-Z (“Show Me What You Got”),[72] Jurassic 5 (“What’s Golden”),[73] Madonna (“Justify My Love”),[74] and My Bloody Valentine (“Instrumental B”)