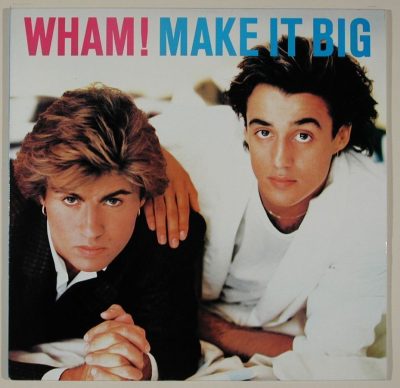 Notable Songs: “Wake Me Up Before You Go-Go”, “Careless Whisper”, “Freedom”, “Everything She Wants”

Why I Loved It: This title is about as symbolic to an 80s act as it can get, because boy did Wham ever “Make It Big” with this album.  Staying on that symbolic word, this album symbolizes 80’s straight-up pop music as well as anything. Many of you won’t agree but in my opinion this is one of the best albums of the entire decade. If you don’t like hearing that then tough shit—go start your own countdown. While their music on a whole is undeniably a huge slice of 80’s cheese, “Careless Whisper” was pretty fuckin’ deep, man.  Sung entirely by George Michael (his Wham! bandmate, Andrew Ridgely would leave the stage when they would sing this on tour), it’s a song about cheating and regretting it. I didn’t care much for the song’s premise as a 14-year old when it came I simply loved signing a long to Michael’s masterful (yes I said fuckin’ masterful) vocals. By the way this song was No. 14 on my Favorite 100 Songs of the 80s countdown last year. The story of how “Wake Me Up Before You Go-Go” came about is as fascinating as the song itself.  As i wrote last year when ranking this song No. 19 on the same countdown, “As legend goes, Ridgely lived at home with his parents even after Wham established themselves in the U.K. because he was always one the road, and also maybe too cheap to get his own place.  One morning Ridgely needed an early wake up call so he left a note for his mother asking to “wake me up up.”  After realizing he accidently duplicated the word up, he intentionally did the same with the last line of his note, which read “before you go go.”  George Michael saw the note, found it funny and sure enough, it eventually became their first signature hit in America.”  Add in two more hit songs to the collection and this is one of the very best 80’s albums, it’s as simple as that.

Commercial Success:  Critics don’t think much of Wham but it’s hard to fathom how ridiculously well this album of theirs did commercially. It rose to number-one on the Billboard Top 200 and stayed there for three weeks before Madonna’s “Like a Virgin” knocked it off. It would stay on the charts for 72 weeks and finish 1985 ranked fifth on the year-end Billboard Top 200.  From the album sprung three number-one hits on the Billboard Hot 100. “Wake Me Up Before You Go-Go” reached one, spent three weeks on top and finished ’85 third on the year-end Billboard Hot 100.  “Everything She Wants” reached one and stayed there for two weeks.  Of course the biggest hit of all was “Careless Whisper”, which rose to one, stayed there for three weeks and went on to finish 1985 number-one on the year-end Billboard Hot 100. For good measure “Freedom” peaked a three on the Billboard Hot 100, giving the album four top three songs. In total Make It Big has sold more than 10 million copies around the world.

Fun Facts: From Songfacts.com: “Under the advisement of Ridgeley, they moved on from their leather-wearing, angry and somewhat political sound to a fluffy, flashier, friendlier pop sound. Michael spoke to Q in 1988 about never quite being comfortable with wearing white shorts and all the earrings. “That was so feminine looking!,” he said. “When I look back on that it’s so disgustingly embarrassing. I saw a clip from (‘Wake Me Up Before You) Go-Go’ recently and I thought, Who the f–k is that? What the f–k was I trying to prove? I’ve never really been quite sure who in the audience goes for this look.” Image won over substance with the popularity of MTV, though, and Make it Big went gold in the United States.

After the incredible success of their second album, Michael began to hear a shift in the sound of his songwriting. It resulted in Wham! announcing in 1986 that they would go their separate ways. They played one last farewell show in June to 72,000 fans at Wembley Stadium.”

LISTEN TO THE MORAN-ALYTICS PODCAST 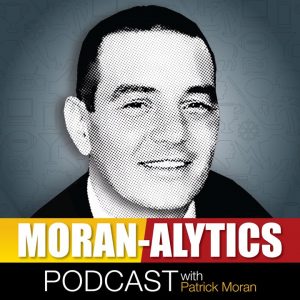