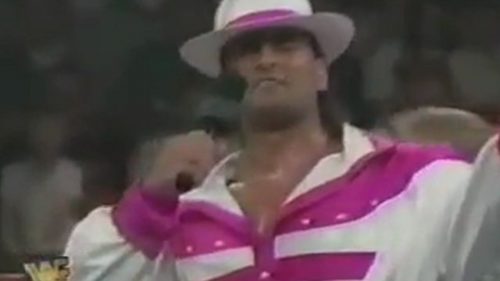 I started with episode 100 in my first recap and this is the fourth time around with this—as we arrive to September, 1996—building towards the In Your House-Mind Games pay-per-view.

−Farooq (with Sunny) defeated Savio Vega in the final first round match of the Intercontinental championship tournament.  Psycho Sid (his next opponent) came down and immediately four referees came between them.

−Get well messages to Johnson taped from Savio Vega, Pyscho Sid, Steve Austin, Goldust, Jerry Lawler, Owen Hart and the Godwinns (I may have missed one or two). Time-fillers not 30 minutes into the show?

−A promo for Mankind vs. WWF champion Shawn Michaels main event at “Mind Games (In Your House)” pay-per-view, followed by an In-ring interview (Carlos Cabrera) with Michaels and his manager, Jose Lothario.  HBK warns Mankind “do not hunt what you can’t kill”.

−A debuting “The Stalker” defeated (jobber) TL Hopper. While this match was going on, the camera cuts to Brian Pillman and Owen Hart backstage as Owens announces he and his brother Bret are back together again (they had been feuding) and that Bret had a major announcement he’d make at the PPV.

−Footage from last week’s WWF “Championship Friday” show with Jerry Lawler interviewing Mark Henry, who hadn’t yet debuted.  Lawler challenged him to a wrestling match but Henry says he’s not ready yet.  Lawler calls him a coward, which makes Henry accepts. The match is set for the PPV later in the month.

(At this point there’s literally been more video footage of other things that stuff going on in this ring).

−Another clip from last week’s “Championship Friday” show, where Mr. Backlund introduced the Iron Sheik to the ring.  The former bitter enemies hug it out and Shekie baby will be training Backlund’s newest mystery acquisition (who later turns out to be the Sultan AKA a masked Rikishi).

−Promo for WWF Superstars, which says it’s been on for more episodes than Seinfeld, more original episodes than Monday Night Football, and when it made its debut “the cast of Friends were still pimple-faced kids”

−The Undertaker defeated a previously undefeated Salvatore Sincere in the main event with a tombstone pile driver.

−Also during the match, Jim Ross (as he’s teased all night) confirms there’s “negotiations” to bring back Razor Ramon and Diesel to the WWF.  He says negotiations have hit a snag with Ramon but they’re progressing well with Diesel. 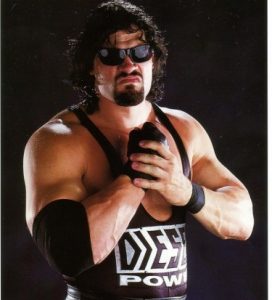 Episode 175 was near the height of the WWF downslide, which is easy to see in both a review of the ratings and show itself.  After dominating in ratings for many years WWF had already lost some of their aging stars to WCW, most notably Hulk Hogan and Randy Savage. They withstood that but the real blows came just a few months before this Raw aired, when first Scott Hall and soon after Kevin Nash defected.

At the start of 1996 WWF and WCW did plenty flip flopping in the ratings wars, with each side claiming victory depending what week it was, but WCW begun to dominate by the end of May.  In fact, when this 175th episode of Raw aired, WCW had either won or tied the ratings war for 17 consecutive weeks.

Watching this show nearly 21 years later, it doesn’t take a genius to know why.

It was also before Steve Austin, Triple-H or The Rock had become any sort of relevant stars, which meant few people really cared about them—yet.

Instead we got a show that featured The Stalker? Crush? An UNDEFEATED Salvatore Sincere?

Beyond the horrible in-ring product at the time, perhaps the most indignant move by WWF was having Ross constantly (for weeks include this one) tease the WWF return of Razor Ramon and Diesel via “sources”, which as we all know turned out to be imposters.  I mean, what in the hell was the brass at WWF ever thinking that it could possibly get over with the audience? It wasn’t going to lead fans to turn the dial off WCW and even if it did, it would only be temporary.

What a miserable time for the WWF and its fans.

A few notes from the show…

♦ Jim Ross was on commentary by this point in place of Vince McMahon along with Kevin Kelly (who?) and Jerry Lawler.  Ugh, even back in ’96 King’s futile attempts at stand-up comedy fell flat in the booth if not downright tasteless.

♦  Ross, as always was great on the mic but took things a bit too far with what he’s described about The Stalker

“A lot of big game hunting. He stalks one animal per year. He hunts that animal, kills that animal, mounts its head and puts it on the stand.”

(Not everyone knows this, but the Stalker was actually Barry Windham, one of the more decorated wrestlers in NWA/WCW history.  This WWF gimmick didn’t last long).

♦  Like I mentioned in our last recap 25 episodes ago, there’s multiple mentions of Mike Tyson early in the broadcast. It’s very obvious Vince wanted him to be a part of WWF, which of course he eventually was.

♦  For what it’s worth, the Intercontinental championship tournament was happening because Ahmad Johnson had to vacate the title after being attacked (by a debuting) Faarooq a few weeks prior. Marc Mero would eventually go onto defeat Faarooq in the finals later this month on an episode of Raw.

♦  1996 was when Sunny was at her best. She looked great and played an important role in WWF both as a manager and segment host. Sunny was the 1996 Pro Wrestling Illustrated Manager of the Year.

♦  Making fun of Jake Robert’s alcohol problem was actually a storyline back in 1996. There’s a clip shown of Lawler pouring a bottle of booze down a beaten Roberts’ throat before Mark Henry came to the rescue. (This was not part of the September 9th Raw).

♦  During this time, The Undertaker was in a feud with Mankind and his former manager, Paul Bearer, who turned on Taker at Summerslam during the “boiler room brawl” match. It feels like an eternity ago, but Taker was such an athletic big man.

MoranAlytics Score: 1.5 out of 10.  This is only the fourth Retro Raw I’ve recapped, but it’s far and away the worst.  If fact, I can’t imagine the show being worse than this pile of shit fans were served. There isn’t one redeeming reason to ever watch this episode of Raw unless you’re a fan of seeing The Undertaker when he could actually move and perform well, or if you like looking at Sunny when she was hot.  Otherwise, this was an awful waste of your time now and your Monday back then.