I’m a big sports bar guy and quite frankly there’s a lack of good ones in Western New York.  Lots of spots slap up memorabilia on the walls and call themselves a sports bar, but Mooney’s Sports Bar & Grill on Military Road actually feels like one. I love going to this place for that alone.

Of course, I’m completing off track and nobody cares about my takes on the authenticity of sports bars.  This is about wings and when it comes to them— is Mooney’s authentically good in that department as well?

PROS: There’s a handful of places for wings in Western New York capable of hitting the spot with numerous flavors and Mooney’s unequivocally is one of them.  Their traditional medium/hot, always what I go by most when evaluating a place may not have knockout power, but they’re good enough to force a standing eight count. As for several of their signature flavors are simply fantastic. The Mooney’s Gold looks and to some extent taste like wings for rich people. The Tropical Thunder were delcious and Italian Style Garlic aren’t far behind.  More importantly the wings I had were cooked to near perfection with a nice balance of crisp and tenderness.

CONS: While certainly far better than average the traditional medium/hot weren’t exactly elite either. That’s not really a “con” but for those unwilling to experiment with fancy flavors who want a regular ole’ Buffalo chicken wing, there’s better places than Mooney’s to get them.

Also not necessarily a con but worth pointing out is the wait being a little long, although in fairness that’s to be expected on a packed Friday night. 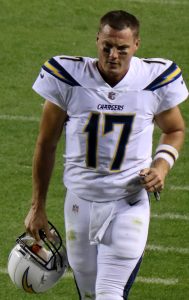 QB COMPARISON:  Philip Rivers. He’s never won MVP but you can count on him going to the Pro Bowl.

RECORD IF MOONEY’S PLAYED A FULL NFL SEASON: 10-6.  A favorite to win the division and at least one playoff game.

OUTLOOK: There’s not necessarily an “Oh my God these are heaven” moment with any one style of wing but they come at you in waves of tasty flavors that make this one of Western New York’s more underrated spots.

Ironically Mooney’s isn’t even best known for wings and it’s not particularly close either.  Mac & Cheese is their signature dish that patrons near and far rave about it.  They also have a gargantuan hamburger challenge that’s basically impossible to finish in one sitting.

I feel very good about recommending Mooney’s as a spot for wings.