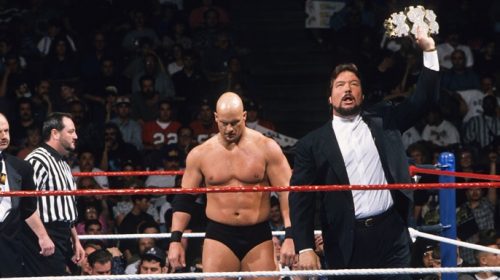 I started with episode 100 in my first recap and this is the third time around with this—as we arrive to March, 1996—about three weeks before Wrestlemania XII.

Raw opens with Savio Vega’s music as he walks down the aisle to face “The Ringmaster” Steve Austin, already in the ring with his manager Ted Dibase at ringside. Mark Henry, on his way to the Olympics is watching at ringside.

Both Vega and Austin are counted out and the two continued to brawl after the bell with Vega eventually getting the upper hand.

Footage from the pre-show earlier in the night when Henry lifted Jerry Lawler over his head and slammed him. 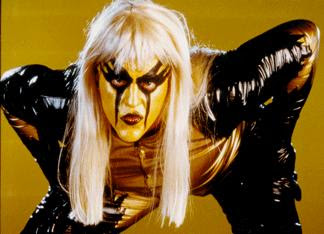 Goldust comes to the ring with Marlena. After a commercial Roddy Piper comes to the ring (Vince McMahon is already there). Piper hurls strong insults (ones that wouldn’t fly in today’s society). They shove each other and eventually Piper drops him with a right hand and accepts a “backlot brawl” match for Wrestlemania XII.  The segment ends with Piper telling Goldust “he’ll make a man out of you”.

The Godwinns with Hillbilly squash Jim Alex Porteau and Jerry Meade in under two minutes.  Phineas Godwinn doing mule kicks with no one else in the ring was everything.

Video footage of Jim Ross chronicling Sean Michael’s training in Texas as he prepares for his hour ironman match against Bret Hart at Wrestlemania XII. They then go to Calgary for footage of Hart training.

Hunter Hearst Hemsley (escorted by Michelle Snickler) beat Vin Grier, also in under two minutes.  It was announced earlier in the day he’d be facing a returning Ultimate Warrior at Wrestlemania XII (he’d lose in just 1:39).

Video of (satirical) “Scheme Gene” profiling the “Huckster” versus the “Nacho Man” (no handcuffs or lady shoes allowed at ringside) match with “Billionaire Ted” as the referee.

The Undertaker and Yokozuna defeated the British Bulldog and Owen Hart (with Jim Cornette) by disqualification in the main event.

Diesel came out early in the match and drilled Paul Bearer at ringside. This prompted Taker to leave after him.  Yokozuna’s holding his own but attacked from behind by Vader, which calls for the disqualified.  Ahmad Johnson comes out for the save and seconds later so does Jake Roberts.  Eventually this sets up their six-man tag match at Wrestlemania XII.

Quote of the Week

“He reminds me more of a tennis ball, bouncing around the ring, He doesn’t have any real moves.” – Bret Hart (on Shawn Michaels).

In my last recap from 25 episodes prior I criticized how uninteresting that Raw felt. A little less than a half year later this episode was the polar opposite. It was mind-blowing observing this episode and seeing among other things Steve Austin and Triple-H as lower mid-carders well before they became WWF cornerstones. Hell, neither character is even featured on the Raw opening video when this airs.

McMahon and Lawler both originally introduce Austin as The Ringmaster “before referring to him as “Stone Cold” for the duration of the match.  I’m not sure this was the first time Austin was steadily discussed as “Stone Cold”, but it wasn’t until three months later when he wrecked Jake Roberts at King of the Ring to commence the 316-era.  Anyway, for now he’s wrestling with white boots on and being called a “technician” by Vince.  Hell, he in the definitive anti Austin moment, he ends up hightailing away from a post-match brawl with Savio f’n Vega.  Inconceivable! 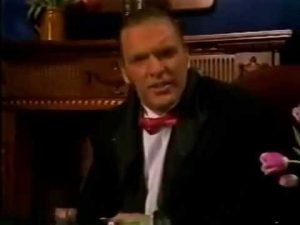 As for Hunter, he was a little less on the fast track to superstardom.  Yes, he’d get the nod to face a returning Ultimate Warrior three weeks after this show at Wrestlemania, but rather than be booked to look strong Trips was squashed in 1:39.  He spent much of 1996 wrestling the likes of Aldo Montoya, Marc Mero and having a forgettable “feud” with Duke “The Dumpster” Droese.

Even not counting Austin and Hunter, there’s much more from this show that strikes me:

Holy shit, I forgot what a freak Goldust was when he first came on the scene. It makes seeing him (albeit much more toned down version of him) 20+ years later remarkable.  The shit he and Piper said to each other during a promo would have them ostracized if the same segment was done today.

Roddy Piper was still able to move around reasonably well.

In promos leading to Wrestlemania, it’s discernible to see Bret Hart has less respect for Shawn Michaels than the other way around.  You can tell he thought HBK was good but legitimately not on his level.  I wouldn’t go as far to say they hated each other by this time, but the seeds were already planted for sure.

Yokozuna as a face.

Diesel as a heel.

Doc Hendrix (aka Michael Hayes) as the voice for a Wrestlemania XII denim jean jacket commercial (which you could buy back then for three installments of $22.95).  The jacket was hideous looking and had wrestler patches sewn on them.  Just atrocious.

Vince firing away at Ted Turner with the WCW fossil satire videos. People forget that Vince was on the offensive with WCW well before he lost Hall & Nash.