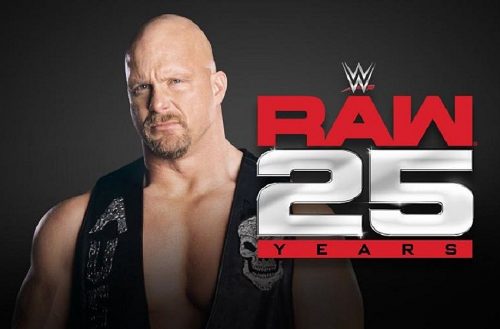 Typically the morning after Raw I post a column with five takeaways from the night before.   Of course, last night wasn’t a typical Raw and I’m not one to sell my legions of fans short.   Many of the legends that have made Raw the longest-running episodic television show in history were on hand last night as WWE was in action both from the Barclay’s Center in Brooklyn and the place where it all started, the Manhattan Center.

By many legends, I don’t mean all of them.  For a variety of reasons ranging from scheduling conflicts to the company flat-out not wanting them around there were several superstars absent that helped shape Raw as a dynamo through the years. Off the top of my head that list includes Mick Foley, CM Punk, Edge, Goldberg, Alundra Blaze, Vicki Guerrero, Lita and arguably the biggest two names in the history of the WWE Raw era, Hulk Hogan and the Rock.

Still, mainly because of all the legends that were advertised to be on the show I was completely prepared to mark out all night and be completely unapologetic over it.  I’m too old to say the origins of Monday Night Raw bring me back to  being a kid as I was already legally drinking when the show’s run commenced, but it definitely made feel a lot younger.

Perhaps mainly because of those insanely lofty expectations when the clock struck around 11:15pm I was left feeling underwhelmed.

FIVE (OF THE) REASONS WHY RAW WAS BAD

1. Peaked Too Early:  The show started completely on fire from Brooklyn with both Stephanie and Shane McMahon in the ring, patronizing the crowd and introducing Vince, who came out and momentarily soaked in the cheers and appreciation before turning on the crowd and claiming he built Raw himself, which of course brought out Stone Cold Steve Austin.  The Texas rattlesnake stunned Shane (twice) and Vince to a roaring reaction from the crowd.  The problem is that the show started on such a high it could only go down from there. This should’ve been the final go-home segment, as no matter what happened over the first three hours, this is what would’ve sent the crowd home happy.

2. Rushed Last Segment:  For three hours of hype on Kane, Braun Strowman and Brock Lesnar being in the same ring this felt far too rushed.  Brock came out and within maybe 120 seconds he’s powerslammed through the table and the show goes off the air.  This was too rushed.  Maybe next time booking shouldn’t have a two segment 8-woman tag match in the first hour or the DX Reunion (see below) that seemed to last an eternity.  That would give you more time to let fans digest the players set to be your PPV main event in six days. 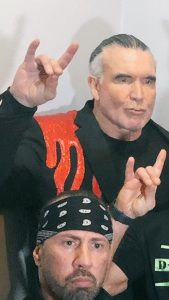 3. Degeneration….. Dragggggggg: DX reunited in the last hour and introduced Scott Hall, who came out to his Razor Ramon music and then… commercial? Are you fucking kidding with that timing? Jesus that was awful—I thought it was a production mistake but apparently it wasn’t.  The Balor Club comes out to show respect, the Revival comes out and there’s a tag team match and then everyone from DX hits their finishers on Wilder and Dawson. In a way I suppose it was cool but sorry, it felt like all of eternity passed by to get there.  Also, is it me or does Scott Hall look like he belongs in the Hollywood Wax Museum?

4. Undertaker Promo meant?  Taker came out to the Manhattan Center to start the 9:00pm hour and cut a promo, which brought out—nobody. I’m also not even sure what the hell he was trying to say.  Was he confirming his retirement? Was this the last time we’ll see him in the middle of a WWE ring? Was he saying that he’s got more souls to bury? I’m so confused. This was stupid.

5. Manhattan Center Wasted: Nostalgic factor aside having portions of the show emulate from the Manhattan Center was a waste of time and according to several videos of the crowd chanting “we want refunds” and “bullshit” via Twitter, didn’t go over very well. It was a waste of the legendary Jim Ross/Jerry Lawler announce team.  I know there were a few off-camera things to take place there but in total there were just three segments over three hours that were carried on TV live. If I bought a ticket I’d be furious.

IT WASN’T ALL BAD.  HERE’S FIVE THINGS I LIKED

♦ Loved John Cena returning.  Interestingly enough despite rampant blogger speculation it wasn’t to start a program with the Undertaker. Instead he returned to essentially put over Elias, who’s becoming a big star.  You have to hand it to Cena, as he’s accepted that as his career winds down his primarily role is to put over guys from the current era. 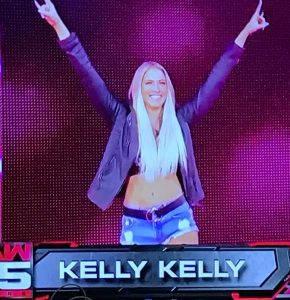 ♦ Jason Jordan’s drawing nuclear heat with the crowd.  He could barely speak over a crowd that booed him with no mercy every time he put his mouth near the mic.  It reminded me of the Vicki Guerrero days. I’ve said it on this blog before—Jordan’s going to become one of the company’s biggest stars as a heel, you watch.

♦ After Austin and Daniel Bryan, the pop for Chris Jericho was probably the best of the night.  Jericho was the lone lone legend to appear that wasn’t previously advertised, which knowing Jericho is hardly surprising.  He’s a made man for life among the WWE universe.

♦ I can look at Torrie Wilson and Kelly Kelly forever.  ♥FOREVER♥.  I’m hoping to see one or both again at the Rumble on Sunday.

♦ The Miz’s victory and eighth Intercontinental title win, while expected was still awesome. Obviously it  launches Roman Reigns build towards yet another Wrestlemania main event., which I pray to God for his and the Philadelphia crowd doesn’t start with him wining the Rumble on Sunday.

A FEW OTHER QUICK THOUGHTS

♦ What the fuck with Broken Matt losing clean to Bray Wyatt on their first TV match? Woken Matt Hardy? More like Jokin’ Matt Hardy.  That booking made zero sense.

♦ Rhyno is a terrible partner.  It’s one thing to toughen Heath Slater up by sacrificing him to the Dudley Boys, but then you celebrate with the guys that put your boy through a table in the middle of the ring?  If I’m Slater I’m waking up this morning thirsty for revenge.

♦ Clearly the WWE is biding their time with Paige.  I wonder if she’s indeed done with her in-ring career, which according to reports is a lock, if they keep her in some managerial or on-screen role or release her soon enough. I really hope not.  Given her history and some of the interviews I’ve heard with her before reinjuring her neck it feels like she really needs WWE.

♦ The division was figuratively non-existent last night in light of Cruiserweight champion Enzo Amore’s rape allegations and subsequent suspension by the company. I’m interested to see how WWE handles this on the air.

♦ Creative couldn’t come up with something a bit more useful for Jimmy Fallon other than to sit at ringside and be briefly ridiculed by Elias?

♦ Lastly, Kurt Angle’s clear incompetence as general manager continued in his handling the triple threat explosion in the ring at the end of the night. You bring a brigade to the ring with the intention on keep Strowman, Kane and Lensar separated and hope to achieve this by employing the services of guys like  Brother Love, Eric Bischoff, Harvey Wippleman and Johanthan Coachman? Fire this man!

CONCLUSION/GRADE: Again, I have to admit my expectations for this historic show were too great.  Aside from Austin and Jericho, who were used brilliantly the rest of the legend cameos felt forced if not downright corny, other than when some of the former general managers and divas (is that still a term?) were introduced one at a time on stage like they do the incoming Hall of Famers during Wrestlemania.  Past greats aside I can’t believe Hardy got beat clean by Wyatt already. Where do they go with that now? Also, it looked last week like the Balor Club was poised to become a heel faction but did they cement themselves as good guys last night? Lastly, we all know Kane is going to eat a pin this Sunday but booking mailed it in on that last segment, as Kane took a F-5 and was disposed of by Lensnar in roughly five seconds before the real confrontation took place.  With so much time to write a show creative knew was coming for months, I was left wanting plenty more.  MORAN-ALYTICS GRADE: C-