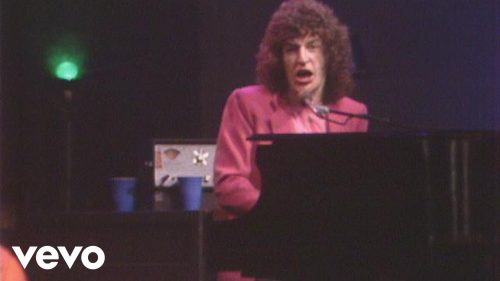 The adult me absolutely hates the spirit of “Keep On Loving You” by REO Speedwagon.  The band’s lead singer, Kevin Cronin wrote the song as a response to finding out his scandalous fiancé was cheating on him prior to their marriage.  Rather than kick the cheating bitch to the curb, Cronin writes he’ll keep loving her forever no matter what she does to him.  To me that sounds like giving her a license to graduate to a full-fledged adulterer.

Despite hating the lyrics and general message the song sends, I can’t help but love it anyway.  I wasn’t yet 10 years old when this song came out and didn’t know—nor was I interested in any deeper meaning.  All I knew was that I loved Cronin’s voice and I wanted to sound like him.  I also dug the piano in this song, and often found myself at my bedroom desk, pretending I was playing the keys while singing along. It’s honestly one of the first 80s songs I can remember learning all the lyrics to.

I could be wrong, but I’m not sure I’d heard a soft rock power ballad before this. Strangely, I recall it having the honor of being in MTV’s video rotation on the very first day the station went on air.  Seriously, I was obsessed with the video.

The song and the video were everything cheesy I loved about the 80s.

Chart Success:  This was REO’s first hit and a huge one at that.  It rose all the way to number-one on the Billboard Top 100 in March of 1981 and stayed on the charts a whopping 28 weeks.  It finished 1981 tenth on the year-end Billboard Top 100.

Great Lyrics:  Cronin’s lucky that I wasn’t old enough to know what the hell he was talking about back in the early 80s or I may not have allowed myself to get hooked on it.

“And though I know all about those men
Still I don’t remember
‘Cause it was us
Baby, way before then, and we’re still together
And I meant
Every word I said
When I said that I loved you I meant that I loved you forever”

Fun Fact: “Fun” may not be the appropriate term for this tidbit, but this song did nothing to help Cronin’s marriage in the long haul.  The couple split a few years after the song was released.  Fortunately for Cronin he found new love and hopefully someone a little more faithful. He’s been remarried for 25 years now.