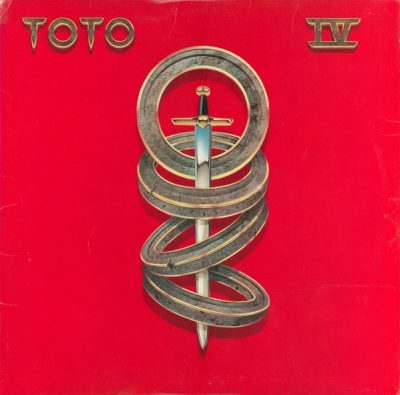 Why I Loved It: It’s hard to put into words how much I love the single “Africa.”  Let me put it to you this way – last year on this very blog I ran a countdown of my Favorite 100 Songs of the 80s.  “Africa” came in at number two. I’ll go one further by saying it’s not only my second-favorite song of the 80s… it’s my second-favorite song ever.  In my countdown I described Africa as “the most delightfully catchy and polished tune of the decade I can think of, and trust me I spent countless hours thinking of this list. Africa is as good as it gets when it comes to tunage from this era, especially  when it comes to the uncontainable chorus that’s transformed into one of the most  renowned drunken sing-along jams known to man (or woman).” It’s one of the few songs I’ve heard that’s even better today it was originally. “Rosanna” was such a cool song and made me wish I could find a girl to love with the same name. That also made my Favorite 100 Songs of the 80’s countdown last year, coming in at No. 45. The tune was written for Rosanna Arquette by Toto keyboardist Steve Pocaro but unfortunately for him that relationship didn’t last. Truth be told, these were the only two songs I really loved from the album, but they’re a pair of the most enjoyable songs of the era and at least for me, ever.

Commercial Success: Their fourth studio effort, aptly titled IV was their biggest and best album ever.  The album reached four on the Billboard Top 200 and spawned two of the biggest singles of 1982. “Africa” was the group’s first and only number-one hit on the Billboard Hot 100, ending the three week run of “Down Under” by Men at Work. It finished 24th on the 1983 year-end Billboard chart.  “Rosanna” narrowly missed hitting the top of the Billboard Hot 100, peaking at number-two and staying there for five consecutive weeks.  Damn you, Survivor (“Eye of the Tiger”) and Human League (“Don’t You Want Me”) for cockblocking “Rosanna” from the top spot. It finished ’82 ranked 14th on the year-end chart. “I Won’t Hold You Back” gave Toto their third top 10 hit on the Billboard Hot 100.  “Make Believe” clawed its way to No. 30 on the chart. Toto went on to receive Grammy nominations in 1983 because of this album, including both Record of the Year and Album of the Year.

Fun Facts: From Songfacts.com: “Toto were top studio musicians before forming the group, and known as some of the best in the business. Lukather told Rock’s Backpages: “A lot of people categorize us as ‘that ‘Africa’ or ‘Rosanna’ band,’ and I hate that shit. We have a lot more substance than that. Don’t get me wrong – those songs have been great to us, but you really don’t understand the depth of the band if that’s all you know.

‘We could be the most misunderstood band in rock history. We consist of some of the most recorded musicians in the business. And yet we take hits for that. [laughs] Ashlee Simpson and all these phony-baloney singers sell millions of records, but everybody knows that’s bogus. Some folks go on the road, and they might as well be miming. My son toured with Lindsay Lohan four years ago. The whole band was playing live, she was lipsynching. She couldn’t sing a lick. Some poor guy had to Pro Tools that every night’.”