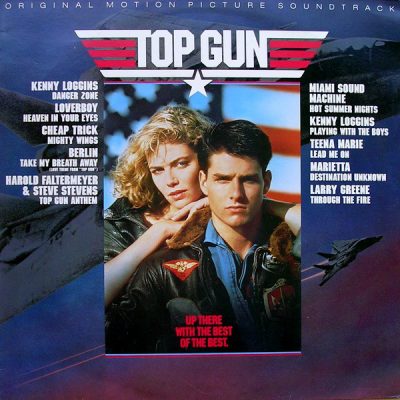 NOTABLE TRACKS: “Danger Zone”, “Take My Breath Away”, “Heaven In Your Eyes”, “Playing With The Boys”

WHY I LOVED IT: I feel like this is a rhetorical question, because who didn’t love the Top Gun soundtrack? It’s pretty much everything an 80’s pop music aficionado could want on one album—loaded with exciting, unashamed cheesy tracks smashed in your face. Of course, when you have the movie soundtrack God himself, Sir Kenny Loggins lending his voice to not just one= but two tracks you know you have a winner on your hands.  “Danger Zone” is the prototypical 80’s action song that fits this movie like a glove. I liked it enough that it’s one of four Loggins jams on my Favorite 100 Songs of the 80’s countdown from earlier this year; bringing up the rear at No. 93.   “Playing With the Boys” is such a fun and underrated gem from the Loggins catalog.  “Take My Breath Away” was the soundtrack’s biggest hit, sung by Berlin (of whom I’ve not heard of before or since) and became one of the 80’s most memorable ballads.

Pop this soundtrack in your car during warm weather season with the rooftop down and great vibes are sure to ensue. You can’t deny the Top Gun soundtrack.

COMMERCIAL SUCCESS:  This is one of the best-selling movie soundtracks not just from the 80s, but all time, as it’s sold more than nine million copies just in the United States alone.  The Top Gun soundtrack dominated Billboard, reaching number-one on the Billboard Top 200 and producing two monster-sized hit singles. “Take My Breath Away” hit number-one on the Billboard Hot 100, finished 1986 ranked 27th on the year-end Billboard Hot 100 and earned itself both an Academy Award and Golden Globe for Best Original Song.  “Danger Zone” narrowly missed out on hitting the top of billboard, settling for number-two because it couldn’t quite get past Peter Gabriel’s “Sledgehammer.” Per Wiki, “According to the MuchMusic network’s program Pop-Up Video, the U.S. Navy described this video (Danger Zone) as “the most effective recruiting poster ever produced”.  “Heaven In Your Eyes” peaked at No. 12 on the Billboard Hot 100 while “Playing With The Boys” got to No. 60 before stalling.

FUN FACTS:  (All this wonderful information is courtesy of Wiki) Kenny Loggins sang “Danger Zone” like only the great Sir Kenn Loggins can, but he wasn’t the first, second, third or even fourth choice to perform the track. That honor originally went to Toto, who didn’t do it because of legal contract issues between their lawyers and the movie producers. After that Canadian rocker Bryan Adams was sought to do it but declined because he said the movie glorified war and wanted nothing to do with it (that’s a bitch move, by the way). REO Speedwagon was third but also said no because they wanted to contribute songs of their own to the soundtrack but movie execs said no. Hell, even Corey Hart, the dude who liked to wear his sunglasses at night was approached but declined. Finally, with no one else to turn to Loggins stepped in and the rest is history. Also, The Motels were originally considered for “Take My Breath Away.” Lastly, Judas Priest was asked to use a song, “Reckless” for the album but the band said no because they wanted it on their upcoming “Turbo” album.  Wrong move there. The song was never released as a single.